“Have I told you about this?”  That is Thomas Murphy speaking. They are the first words out of his mouth and, as a reader, you’ve just been pulled into one of the most wonderful books I’ve read in a long time.

It is hard to explain just why I love and recommend this novel; it almost doesn’t have a plot. Well, there’s Murphy, a widower who has recently lost his beloved wife of more than fifty years; an aged, elegant and huge Manhattan apartment that’s been home for almost all those years and, with rent control, will probably be home for many more, unless the evil building manager (in cahoots with the building owner) kicks Murphy out first; there is the beloved but interfering only daughter, who believes he must see a neurologist just to be on the safe side because he let a pot of boiling eggs cook to near house-fire dimensions; and his four-year old grandson William, who is his best friend and delight, especially when Thomas is allowed to care for him without interference in Central Park. And it doesn’t hurt that Thomas is a poet, an often less than moderate drinker and an Irish immigrant from the isle of Inishmaan, which may very well say it all.

It is a story of sorts: a beginning when Murph (the handle he goes by) first speaks, inviting the reader to hear his story, a middle when a stranger and fellow drinker asks him to intercede on his behalf in a marital problem, and several other events that take Murph off track. These derailments include the building manager, a neurologist who is pushing for more tests to rule out dementia, his daughter’s decision to leave the States for teaching abroad, which means an unspecified period without sweet, funny William, and lastly, the unexpected and real possibility of new love. Thomas Murphy’s ability to deal, or not, with these issues is grounded in the depth of a well-lived life, a life of love, loss and laughter, as well as poetry and more than a few rounds at the bar.

What is Murph’s track? He is preoccupied by aging. Recalling what has already occurred in one’s life, at a certain age, trumps any great plans for a future of limited length. In an almost conversational narrative, we learn of Murph’s first youthful love, his heartache for an island that becomes more mythic than metaphor, a wife whose presence is still felt, and a wide range of people and events that have touched him deeply. We feel his frustration as he deals with the maddening minutia of medical red tape that comes with old age. We learn, too, of the homeless men and women whose poetry he encourages. For all Murph’s flaws, he has heart and is not afraid to take risks, even at this time in his life.

Roger Rosenblatt’s “Thomas Murphy” makes being Irish something holy, almost sacred. Rosenblatt’s writing can bring you to tears as easily as out-loud laughter. Murph is a wonderfully worthwhile character. If you are a mature reader, you will already know Thomas Murphy, if you are younger, you may learn something about your parents, regardless of ethnicity or profession. Have I told you about Thomas Murphy, the best book I’ve read this year?   – Sunny Solomon

Also available by Roger Rosenblatt: The Man in the Water; Making Toast; Kayak Morning:Reflections on Love, Grief and Small Boats; Rules for Aging; Unless it Moves the Human ;Heart; The Boy , A New York Childhood; Lapham Rising;Beet; The Book of Love: Improvisations on a Crazy Little Thing; Coming Apart, a Memoir of the Harvard Wars; Where We Stand, 30 Reasons for Loving Our Country; Anything Can Happen 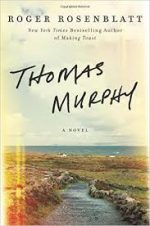 Sunny Solomon holds an MA in English/Creative Writing, San Francisco State University. She is a book reviewer for “The Clayton Pioneer” and her poetry and other writing has been published in literary journals, one chapbook, In the Company of Hope and the collection, Six Poets Sixty-six Poems. She was the happy manager of Bonanza Books, Clayton, CA and Clayton Books, Clayton, CA. She continues to moderate a thriving book club that survived the closure of the store from which it began. Sunny currently lives next to the Truckee in Reno, NV.
More from this reviewer
PrevGeorgia, A Novel of Georgia O’Keeffe
FinaleNext