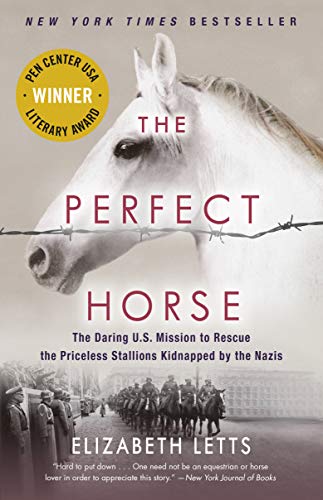 The Perfect Horse by Elizabeth Letts, author of The Eighty Dollar Champion, was the perfect book to review for the Concord Clayton Pioneer. Just the month before, the Pioneer had a standout article about Elena Flaharty and her dressage champion horse, Charly. The Perfect Horse is about the rescue of horses stolen in WWII by the Nazis (for breeding purposes) from The Spanish Riding School of Vienna, Austria. The Spanish Riding School is famous for its highly trained riders and white Lipizzaner stallions who take dressage to the highest level possible.

Letts does a great job of laying out the timing, the players, and the locations of this fascinating story, which peaks at almost the end of World War II. Some of you may remember the 1963 Disney movie, Miracle of the White Stallions. The movie version gives General George Patton the heroic role. In contrast, thanks to Letts’ meticulous research, her book introduces the reader to a range of characters, German, Austrian, and American, who were the real heroes. Patton’s part in the rescue was to okay the mission undertaken by Colonel “Hank” Reed, commanding officer of the 2nd U.S. Cavalry.

The Perfect Horse is laid out in near military precision: Part One – The Europeans; Part Two – The Americans; Part Three – The Mission; and Part Four – The Homecoming.  Under Europeans, Letts includes the Germans and all those characters whose countries were occupied by Germany. The Americans include not only GIs and officers but also a fascinating brief history of the U.S. Cavalry at its peak and its demise. Part One and Two are enhanced by the personal information surrounding each character. The one thing that connects the European and American participants is a love of horses. Once the Americans discover the compelling beauty of the Lipizzaner stallions and the amazing feats of both equestrian and horse, the plan to save them from falling back into Nazi or the approaching Russian hands is a no-brainer.

Letts includes personal background on the horses, mares and stallions. By the end of the war, both Nazis and Russians troops were slaughtering horses for meat. Those Germans wanting to save the Lipizzaners, knew their only hope was to have the U.S. Army claim them as captured spoils of war.

I grew a little impatient reading the first half of the book, but by page 145, with the rescue mission finally in view, I could not put the book down. The fate of the horses after the rescue, when the war in Europe has ended, is both wonderful and sad. After all, it is a war story. Nobody, Americans or Europeans, gets off easy, and that is one of the things I liked best about the author’s telling. The perfect horse is the Lipizzaner breed, but The Perfect Horse, the novel, is a story for the whole family to read and discuss. For those family members not ready for war stories, I suggest Marguerite Henry’s White Stallion of Lipizza for younger readers.  –  Sunny Solomon 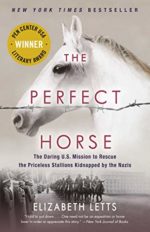 Sunny Solomon holds an MA in English/Creative Writing, San Francisco State University. She is a book reviewer for “The Clayton Pioneer” and her poetry and other writing has been published in literary journals, one chapbook, In the Company of Hope and the collection, Six Poets Sixty-six Poems. She was the happy manager of Bonanza Books, Clayton, CA and Clayton Books, Clayton, CA. She continues to moderate a thriving book club that survived the closure of the store from which it began. Sunny currently lives next to the Truckee in Reno, NV.
More from this reviewer
PrevA Tale of Two Murders
Always HomeNext