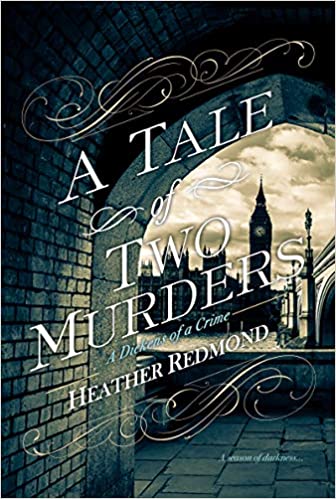 A TALE OF TWO MURDERS

Heather Redmond has begun writing a new detective series featuring a youthful Charles Dickens pursuing multiple murderous clues and figuring out whodunnit. Aiding and abetting Dickens, who in 1835 was a newly-hired reporter just learning his journalistic trade, is the flirtatious Kate Hogarth, the young woman that the reader knows will marry Dickens a year later. It is great sport to follow Redmond’s reconstruction of their embryonic relationship as the two neophytes work together to solve A Tale of Two Murders.

Two young women have been murdered exactly a year apart and in strikingly similar circumstances. Each aged seventeen, each in good health, each succumbing painfully to what might be a case of poisoning. The second victim was a neighbor of the Hogarths. Dickens was sharing an Epiphany repast with Kate’s family when they heard the dying girl’s loud and painful death throes. Kate, Kate’s father (also Dickens’ employer), and Dickens rushed next door to be of help, so they were in attendance when Christiana Lugoson died. At work the next day, when Dickens learns of Marie Rueff’s parallel demise the preceding year, he decides to investigate. Kate, who can’t resist the ensuing intrigue, becomes his sidekick and his sounding board.

Redmond does a good job of replicating the sorts of places Dickens might have gone, places that will reappear in the novels he has not yet begun to write in 1835. Muddy riverbanks, public houses, the stage of a local theatre, highbrow salons, and gilded houses, all shrouded in fog and icy weather. She also does a good job of introducing the sorts of eccentric men and women of both high and low stations that Dickens will subsequently characterize. As a matter of fact, in the pages of this novel he is working on sketches that sound familiar, even as he is doing his day job of reporting and tracking down the mysterious murderer whenever he has a moment to spare. Redmond knows her imagined nineteenth-century London and she describes it well. If I have a fault to find with her novel, it’s that she doesn’t spend quite enough words on the ambiance and the imitations of Dickens’ style. Rather, she relies on dialogue much more intensely than Dickens ever did, and I thought the incessant conversations obfuscated some of the subtleties.

Unfortunately, I may be overly critical because I know too much about Charles Dickens and his masterpieces, but that kind of knowledge added to my appreciation of A Tale of Two Murders.  Familiarity with A Tale of Two Cities definitely enhances the reading of A Tale of Two Murders, just as I am sure the second mystery in Redmond’s series, Grave Expectations, will be enhanced by memories of Great Expectations. Even more provocative is the growing attraction between Dickens and Kate. While everything is hearts and flowers in 1835, the relationship actually faltered badly after the two were married. Ten children later, Kate was overweight, overwrought, and constantly angry at her plight. Dickens, too often attracted to other women, apparently loathed her and once even tried to have her committed to an insane asylum. Redmond implies none of this, choosing instead to portray the two as innocently headed toward a happily ever after scenario sometime in the future. As I noted earlier, I found it great sport to compare Redmond’s provocative portrayals of Dickens and Kate increasingly drawn to each other in an up-tight Victorian world. I wonder if Redmond, who has hit upon an effective predication in A Tale of Two Murders, will go on to write further mysteries where the Mr. and Mrs. Charles Dickens’ relationship falls apart?   –  Ann Ronald 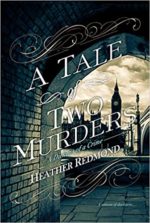 Ann Ronald is a retired English professor from the University of Nevada, Reno. Author of dozens of reviews, she’s also written a number of books about the American West. They include literary studies such as The New West of Edward Abby and Reader of the Purple Sage, cultural studies such as GhostWest and Oh, Give Me a Home, and nature writing such as Earthtones: A Nevada Album. Her latest is a work of fiction, Friendly Fallout 1953. Since retiring, she’s been reading vociferously, so “Bookin’ With Sunny” is giving her a wonderful opportunity to share thoughts about her favorite new discoveries.
More from this reviewer
PrevGertrude Stein Has Arrived
The Perfect HorseNext