Home » Reviews » Biography » The Eighty-Dollar Champion: Snowman, the Horse That Inspired a Nation

The Eighty-Dollar Champion: Snowman, the Horse That Inspired a Nation 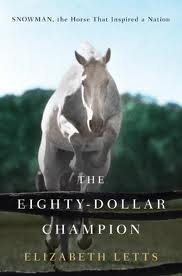 When Harry de Leyer arrived at the weekly Holland, Pennsylvania horse auction, he was late. It was February 1956. He had driven through rough weather from Long Island, New York, in a station wagon with bad lights and one tire that had gone flat. The only one left at the auction was “Killer,” the man who waited every week until the auction’s end to buy all the unsold animals. These he’d load onto his truck and take to the slaughterhouse. Harry had hoped to buy a good lesson horse, something his students at an exclusive boarding school for girls on Long Island could ride. He spoke briefly to Killer before returning to his car. He could see and hear the nervous movement of the horses in the truck – all but one. Through the slats, a rather pathetic looking gray plow horse calmly watched as Harry passed. Harry paused and looked at the horse looking at him. In those few moments, man and horse connected. Harry went back to speak to “Killer” again.

The Eighty-Dollar Champion: Snowman, the Horse That Inspired a Nation is a love story like no other. Elizabeth Letts, hooks the reader within the first two pages and she never lets go until the end of this wonderful true story. Snowman, as the gray Amish plow horse would soon be called, was purchased that day for eighty dollars, including delivery. After weeks of good care and nourishment, the gray became the darling of the entire de Leyer family. Harry knew that Snowman was not another Seabiscuit. Speed was not Snowman’s thing. Seabiscuit could run fast, very fast, but what Harry would soon find out was that Snowman could jump, jump high, very high.

How this young Dutch immigrant, coming to the States with his wife in the early 1950s, found his way to become a riding instructor for the daughters of the wealthy at an exclusive boarding school; came to buy an old Amish plow horse; and then to have that horse take him into the rarefied equestrian world of show jumping, all the way to the championships at Madison Square Gardens, is pure magic.

Letts takes the reader back to Harry’s youth on a farm in Holland and then through his wartime experiences under Nazi occupation. The author somewhat overplays a link between Harry’s wartime years and Snowman’s possible hardships as a farm horse (we only know that Snowman bore the marks of the plow and that he was in poor physical condition when purchased). Letts could have loosened up on the issue of man and horse sharing the underdog status.

With the author’s strong background as an accomplished equestrian, she excels in describing the time and patience that go into training a jumper. Sometimes a horse is a jumper at heart, as Harry found out when, for financial reasons, he sold the gentle horse to a nearby doctor. On multiple occasions, Snowman found his way back to Harry, having jumped over every fence between the doctor’s farm and Harry’s. de Leyer happily bought him back from the doctor, and he and Snowman would not part again until death. I told you it is a love story.

In describing Harry’s unusual style of  horsemanship when jumping, with extremely loose reins, giving it all to the horse, Letts describes the jumping: “This was more than an act of athletic prowess; it was an act of joy.” She also has a gift for choosing just the right word to enlarge and enrich a descriptive passage, as when writing about the grounds of an outdoor show: “The bright green turf field was as neatly groomed as a golf course fairway.” The word “fairway” allows the reader to see the field on a grand scale.

Snowman’s story is not only his, it is also ours as America’s postwar culture shifted into a democratization of the exclusive world of highly bred show jumpers and the equally highly bred equestrians who rode them. Thanks to the plow horse turned jumper, this was also true of the people who were drawn to the sport. If they’d let such a horse as Snowman compete, then it stood to reason a bloodline should not be required of spectators cheering from the bleachers. The world was changing. The author’s depictions of high school women of the 1950s are spot-on. It’s easy for readers to find their way down memory lane when told of Snowman’s picture on the cover of Life Magazine and his appearance on the Tonight Show with Johnny Carson. Snowman was a horse as at home with the four de Leyer children riding him bareback as he was taking a six-foot fence in the show ring.

Reading this book was a great ride and I’d say Elizabeth Letts went over some very high fences. She may have bumped a few rails, but overall she pretty much cleared the course with thrilling form and only a couple of faults. The Eighty-Dollar Champion: Snowman, the Horse That Inspired a Nation is an ideal book for the equestrian or horseback rider in your family. What, no family? But you love horses? Then The Eighty-Dollar Champion has your name on it.  – Sunny Solomon

Sunny Solomon holds an MA in English/Creative Writing, San Francisco State University. She is a book reviewer for “The Clayton Pioneer” and her poetry and other writing has been published in literary journals, one chapbook, In the Company of Hope and the collection, Six Poets Sixty-six Poems. She was the happy manager of Bonanza Books, Clayton, CA and Clayton Books, Clayton, CA. She continues to moderate a thriving book club that survived the closure of the store from which it began. Sunny currently lives next to the Truckee in Reno, NV.
More from this reviewer
PrevThe Language of Flowers
Bull RiderNext