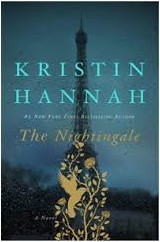 Whenever I read a book about the German occupation of France during World War II, I am aghast at the horrible living conditions, the deprivations, and the relentless cruelty that ensued. Kristin Hannah’s novel, The Nightingale, highlights the enduring bravery of a French family when confronted by a series of unbearable events. Vianne Rossignol Mauriac and her younger sister, Isabelle Rossignol, were impacted first by World War I. Their mother died shortly after their father returned from battle, and he—damaged by his wartime experiences—took no interest in their upbringing. Vianne coped by complying and acquiescing; Isabelle, by misbehaving and rebelling.

That pattern, in place when The Nightingale begins, solidifies as World War II starts to take a toll on the sisters’ lives. Vianne’s husband is conscripted and soon captured, leaving her at home in the Loire Valley with their small daughter. What once was an abundant existence soon becomes a time of scarcities and starvation. Vianne endures. Isabelle, on the other hand, wants to rebel, to join the French Resistance, to do something, anything. And so the sisters part ways. Vianne stays behind, continuing to cope, praying for her husband’s return while protecting their daughter as best she can. Isabelle seeks adventure. First a message courier and a deliverer of forged documents, she eventually becomes a trusted part of the resistance network. Finally, she transforms herself into “The Nightingale,” helping downed pilots survive behind enemy lines and leading them across the Pyrenees to safety.

Hannah depicts the contrasting personalities and their diverging stories with stunning realism and with unceasing sympathy. The reader wants to weep alongside Vianne, as she struggles to stay warm by stuffing newspapers inside her clothes, as she stands in long lines to buy meager rationed food, and as she finds she must share her home with German officers. Her best friend, who lives next door and whose husband is in the Army with Vianne’s Antoine, is Jewish. They support one another as best they can, but of course their circumstances grow more dire as time passes. Meanwhile, Isabelle puts herself in increasingly dangerous situations, doing so with a bravery and a joie de vivre that is both poignant and frightening.

The Nightingale opens with the recollections of an elderly woman. “I find myself thinking about the war and my past,” she muses, “about the people I lost.” The memories of this unnamed woman subsequently are interspersed with the traumas of wartime France. Midway through the action, she receives an invitation to a fiftieth anniversary celebration of the contributions made by Juliette Gervaise, code name “The Nightingale.” Once she left France, this elderly woman has never returned. Vianne or Isabelle? The reader learns her identity only in Paris, at The Nightingale’s close (if the reader can read through the tears that by now are bound to be trickling down the reader’s cheeks. I just reread the last few pages, and teared up all over again).

It is difficult to put the emotional impact of The Nightingale into words. Not only are the wartime themes portrayed with increasing intensity, but the family dynamics are stunning, too. The sisters, so very different, quarrel repeatedly. For good reason, I might add. Nonetheless they love each other. How that love endures is part of the power of The Nightingale’s story, one that speaks to a wide range of readers. Kristin Hannah should be very proud of her creation. It’s one of the best books I’ve read in a while. – Ann Ronald 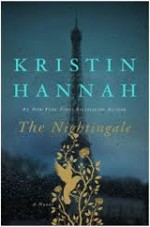 Ann Ronald is a retired English professor from the University of Nevada, Reno. Author of dozens of reviews, she’s also written a number of books about the American West. They include literary studies such as The New West of Edward Abby and Reader of the Purple Sage, cultural studies such as GhostWest and Oh, Give Me a Home, and nature writing such as Earthtones: A Nevada Album. Her latest is a work of fiction, Friendly Fallout 1953. Since retiring, she’s been reading vociferously, so “Bookin’ With Sunny” is giving her a wonderful opportunity to share thoughts about her favorite new discoveries.
More from this reviewer
PrevTestament of Youth
Silent EchoesNext