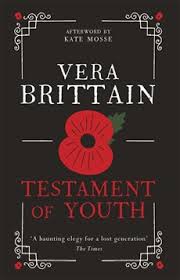 Vera Brittain was in many ways a typical female product of a slightly repressive, prosperous, late Victorian family. Despite the potential stultification, she developed an internal compass to steer her life into uncharted waters. When Great Britain entered the war against Germany and Austria in August 1914, Vera Brittain had just received her letter of acceptance to attend Somerville College at Oxford University. She was twenty and a brilliant student. However, she had not attended a school that taught Latin and Greek to prepare its students for the rigors of Oxbridge (Oxford and Cambridge). Nor had her father thought it important for her to expect an education beyond what she had already accumulated. Nevertheless, she spent a year cramming for the Oxford entrance exams (which she aced) and was excited to matriculate there along with her younger brother and several of his friends.

When Great Britain joined the war in 1914, she found that it changed her life, “ a great inconvenience.” Although she finished her first year at Oxford and wowed her professors, her inner compass was directing her life along other paths. Such was her visceral connection to her brother and his friends that she could not remain a mere spectator while they became officers and prepared for war. She quickly settled on becoming a VAD—a nurse’s dogsbody in the Red Cross’s Voluntary Aid Detachment. At the end of that academic year she took a leave of absence from Oxford and became a VAD probationer at a London hospital for wounded soldiers.

And so her adventures began. Nothing in her previous life had prepared her for treating naked men with suppurating wounds, gangrenous limbs, rebellious bowels, and shell-shocked tempers. Death visited daily. Nor was she prepared for the qualified nurses who jealously guarded their medical territory or for living with other VAD’s in cramped rooms with rudimentary plumbing. By war’s end, her nursing activities had taken her from London to Malta to France and back to London.

, she had access to them, to her diaries, and poetry from dozens of soldier poets, many of whom would become famous. Brittain wrote poetry, too. Her first volume was published during the war. Poetry suffuses her memoir and gives direction and substance to its major themes.

After the war she began to reassemble her shattered life into a recognizable pattern, a painful, erratic, and nightmare-riddled process. She returned to Oxford, this time to study history in a vain attempt to understand the insanity that led to Europe’s 1914-18 catastrophe. After graduation, she aimed at becoming a freelance journalist but gained more notoriety as a public speaker for the League of Nations Union in London. She presented her increasingly pacifist and feminist thoughts on more than a hundred occasions. While her speaking and journalism paid the bills, she also wrote two novels.

She gained a measure of redemption by filling her life with work, and slowly came to accept that any future contentment would be possible only if she could somehow let go of past traumas and devastating memories. – Neal Ferguson

The film Testament of Youth was released in U.S. in June 2015. 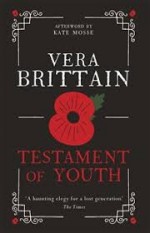 Neal Ferguson is a self described Anglo-phile. After studying for a PhD in British history and doing research for a year in various British archives, he came to the University of Nevada in 1970 to teach. Soon he found himself in administration where he remained until 2003. After returning to full-time teaching a decade ago, he decided to concentrate his teaching energies on Medieval British history and various global aspects of World War II. Dedicated to Ambrose Bierce’s proclamation that the purpose of war is to teach Americans geography, Neal insists that his students accompany him (in class) to sundry east European rivers and steppes, African deserts and jungles, south-east Asian mountain ranges and peninsulas, and small islands and coral reefs in the Pacific. Currently he is writing a book about the ups and downs of General Douglas MacArthur’s military reputation.
More from this reviewer
PrevHarland’s Half Acre
The NightingaleNext