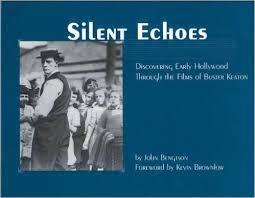 For a recent wedding anniversary gift, my wife bought me The Art of Buster Keaton (Kino Video). It’s a boxed set of eleven DVDs containing the best work of the silent film comedian. Totaling almost a dozen feature films and nineteen shorts, the cumulative effect of viewing them left me delightfully overwhelmed.

We’ve always been Keaton fans. His humor dates well, much funnier to my mind than Harold Lloyd or Chaplin. Keaton’s stunts and set-pieces are so infinitely complex and often dangerous that laughter sometimes takes a back seat to sheer jaw-dropping awe.

This is not a movie review. To understand Buster Keaton and his times, I sought recourse to an oversize photo book published a few years back called Silent Echoes, Discovering Early Hollywood Through the Films of Buster Keaton. On the surface, this volume analyzes still photographs of Keaton’s comedies to determine where they were filmed. Typically, this was on the streets of Los Angeles near the Keaton studio, located at Lillian Way and Eleanor Avenue, just a few blocks south of present day Hollywood. Also nearby in those days were fields of oil derricks, a feature of Los Angeles life in the 1920’s.

The physical city of Los Angeles has always fascinated me. It grew from nothing, an overnight boom town. Old buildings of curious design were replaced by new ones of radically different styles. Old neighborhoods vanished beneath freeways until the skyline became unrecognizable from just a few years ago. Unlike most American cities, these changes are documented by film makers like Keaton.

The more I examined stills, old fire insurance maps, and single frame captures from Keaton movies, the more Silent Echoes became an obsession. I followed the arrows connecting scenes from Keaton comedies to photos of the exact locations today. I still addictively paw through this book almost daily since purchasing it a dozen years ago.

True, Keaton filmed some scenes on location: Cottage Grove, Oregon (The General), and the Sacramento River near the state capitol (Steamboat Bill, Jr.). These have a fascination of their own, but Los Angeles rearranges itself at a faster rate than anyplace else I can think of and, for me, remains a focus of ongoing interest. Silent Echoes could become an obsession for you too.

I highly recommend watching the Keaton films on this Kino set. It’s just out on Blu-Ray Disc. If they grab you as hard as they did me, then track down Silent Echoes, still in print from the publisher, IndieBound, B&N. – Dan Erwine

Dan Erwine holds a BS in Telecommunications, San Diego State University. Dan recently retired after four decades in radio broadcasting. His background San Diego stations KFSD and NPR's KPBS, and KUNR, Reno, NV. Over the years, Dan has produced and hosted a number of talk shows and interviewed over five thousand writers in almost every genre and career, from such notables as David Brin to Seamus Heaney, Allen Ginsberg, Judy Collins, Charlton Heston and Wally Schirra. Dan is a comic book aficionado and has a special interest in film, science fiction and mystery. He lives with his wife in Reno, NV.
More from this reviewer
PrevThe Nightingale
The LowlandNext