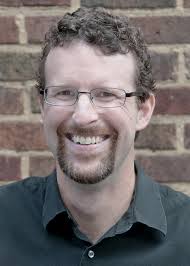 The Midwife’s Tale and The Harlot’s Tale 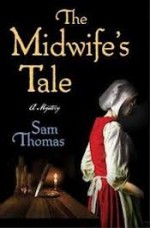 Historian Sam Thomas, while researching seventeenth century conflicts between Puritans and Royalists, discovered a will written in 1683. The will introduced Thomas to Bridget Hodgson, a woman who deemed herself a midwife rather than a widow (an unusual declaration of selfhood in those days). Further research led Thomas to learn a great deal about midwifery in England; then the author’s fictional imagination took over. The result is The Midwife’s Tale, featuring a woman who shares a few features with her prototypical namesake but who follows a story line all her own. Now there is a sequel, The Harlot’s Tale, that continues the midwife’s adventures in seventeenth-century York.

Disputes between Catholics and Protestants are rife and tempers running high when The Midwife’s Tale begins. Into this mix steps Bridget Hodgson, sister-in-law to a powerful man who delicately is playing one side against the other. So, too, are the other men in this novel. No one is sure who will ultimately seize power, so everyone is carefully hedging his bets. As a midwife, Lady Bridget Hodgson is privy to many secrets, and, as a well-do-do widow, moves in high social and political circles. Thus the plot unfolds, with Bridget gradually uncovering secrets that others desperately wish to keep hidden.

A friend of Bridget’s, Esther Cooper, has been accused of murdering her husband. Bridget believes in her friend’s innocence, so she investigates. As The Midwife’s Tale’s dust jacket so succinctly states, Bridget then begins unravelling a complicated plot wherein, “tyranny and treason go hand in hand.” How to save Esther without compromising her own family is key to Bridget’s investigation. Assisting her is Martha Hawkins, a newly employed servant with a somewhat mysterious past. Martha’s survival skills, plus her down-to-earth acumen, make her a valuable accomplice whenever Bridget gets into difficulty. 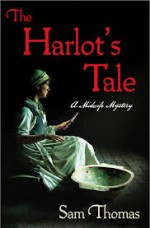 The Harlot’s Tale takes place a year later. Cromwell’s Puritans have gained control of York, with a purge of sinners as the first item on their ruling agenda. A fire-and-brimstone preacher, his wife, his children so aptly named Praise-God and Silence, plus a host of other godly followers fill The Harlot’s Tale with sermons and prayer. At the same time, whores and whoremongers are being murdered, their mutilated bodies found with violent biblical allusions clutched in their hands. A self-appointed executioner apparently believes he is doing God’s will by exterminating York’s fallen women. Bridget and Martha are thrust into the action when Edward Hodgson asks for his sister-in-law’s help, and once again they must negotiate a delicate balance between the rigidity of their milieu and the retributions taking place in the community.

Both novels ring true, with accurate reconstructions of times past. Both The Midwife’s Tale and The Harlot’s Tale bring seventeenth-century York to life in convincing ways, and I don’t mean to be trite as I write that observation. From the back alleys to the halls of power, from the dingy alehouses to the delicate parlors, from the travails of birthing to the raucous sharing of spirits and secrets, these books astutely reproduce a distant generation with an array of concrete details. Yet neither story lags nor falters. Sam Thomas’s prose moves along in a lively fashion, while the historical ambiance shadows the story line as intrinsically and as naturally as can be. Any author who can accomplish this feat deserves a lot of credit, and Sam Thomas does an especially fine job of plunging his readers into the intricate world of Royalist/Puritan York. When I finished The Midwife’s Tale, I could hardly wait to begin The Harlot’s Tale. Now I’m ready for an as-yet-unannounced third book. I hope Thomas publishes another sequel soon, because The Harlot’s Tale, like its predecessor, left me wanting to read more about the Hodgsons and their vengeful world.  -Ann Ronald

Also available by Sam Thomas: The Witch Hunter’s Tale; The Maidservant and the Murderer. 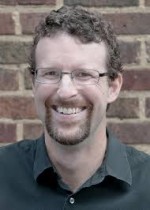 Ann Ronald is a retired English professor from the University of Nevada, Reno. Author of dozens of reviews, she’s also written a number of books about the American West. They include literary studies such as The New West of Edward Abby and Reader of the Purple Sage, cultural studies such as GhostWest and Oh, Give Me a Home, and nature writing such as Earthtones: A Nevada Album. Her latest is a work of fiction, Friendly Fallout 1953. Since retiring, she’s been reading vociferously, so “Bookin’ With Sunny” is giving her a wonderful opportunity to share thoughts about her favorite new discoveries.
More from this reviewer
PrevThree Mysteries by Frances Brody
The Long ShadowNext