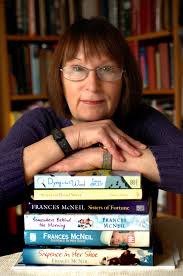 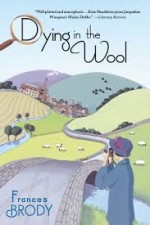 Another cozy British mystery, another spunky heroine, another assemblage of novels to follow contentedly for years. Frances Brody has added another detective series to my list of favorites. The stories take place in Yorkshire, just after the end of World War I. Because Kate Shackleton’s husband, Gerald, has not returned from the battlefield, she has been investigating his disappearance and helping families look for other soldiers missing in action. As a result, she has developed something of a reputation for finding people. The first Kate Shackleton mystery, Dying in the Wool, begins when someone, for the first time, is willing to pay for Kate’s detective services. Dying in the Wool does not recall any details of her earlier amateur investigations, nor does it describe her unsuccessful searches for her husband. Instead, the Kate Shackleton series picks up when Kate undertakes her first case as a professional detective.

Kate’s father, superintendent of the West Riding Constabulary, encourages his daughter’s new career. Her less than enthusiastic mother, the aristocratic Lady Virginia, wishes their daughter would concentrate instead on finding a new husband. To assuage his wife’s concerns and hopefully to keep his daughter out of trouble, Superintendent Hood convinces Kate to hire Jim Sykes, an ex-policemen whose talents complement her instincts. The combination turns out to be fortuitous, as the pair soon is solving one confounding mystery after another. The combination turns out to be lucrative, as well. Quickly, other rewarding and profitable cases come their way. 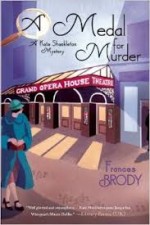 Each of their fictional adventures centers on some aspect of post-war life in England. Dying in the Wool takes the reader into West Riding’s woolen mills and a manufacturing milieu that no longer exists. One wealthy mill owner has gone missing. Kate and Sykes must find him, and find out why he disappeared. The second novel in this series, A Medal for Murder, offers insights into British history. Events set in motion during the Boer War in 1899 intrude on the present. A missing person, a murder, and an intriguing cast of characters soon embroil Kate and Sykes in another mystery to solve. The third novel, Murder in the Afternoon, deals tangentially with labor issues at a time when labor unions were hotbeds of protest. Much of Murder in the Afternoon’s action takes place in a limestone quarry and on a nearby farm recently purchased for quarry expansion. In every case, the plot takes precedence over the substantive historical allusions, but the historical backgrounds honestly convey a period of radical change. Great Britain can never revert to its pre-war comforts and contentment.

Kate drives an automobile. Not many people owned automobiles in those days, and even fewer women drove them. Kate is fiercely independent, a trait that regularly confronts her charming nemesis, Scotland Yard Chief Inspector Marcus Charles. Kate never behaves the way proper women ought to conduct themselves. Kate is feisty, as Jim Sykes learns to his dismay. As a cozy heroine, I found her most satisfactory. Hercule Poirot or Armand Gamache she is not, but it is safe to say that she functions rather like a young Miss Marple. Nosy, inquisitive, and unwilling to take no for an answer. 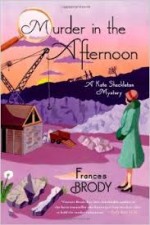 Right now, only these three novels are available from Minotaur Books. But I looked on-line and found that three more Kate Shackleton mysteries have been published in Great Britain. Piatkus Press lists #s 4, 5, and 6 in the series: A Woman Unknown, Murder on a Summer’s Day, and Death of an Avid Reader. I’m sure I’ll read them all. And I’m sure that any reader who enjoys comfy novels in a cozy series of genre mysteries will enjoy Kate Shackleton’s escapades, too.

Also available by Frances Brody: Death of an Avid Reader; Murder on a Summer’s Day; A Woman Unknown. 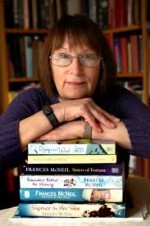 Ann Ronald is a retired English professor from the University of Nevada, Reno. Author of dozens of reviews, she’s also written a number of books about the American West. They include literary studies such as The New West of Edward Abby and Reader of the Purple Sage, cultural studies such as GhostWest and Oh, Give Me a Home, and nature writing such as Earthtones: A Nevada Album. Her latest is a work of fiction, Friendly Fallout 1953. Since retiring, she’s been reading vociferously, so “Bookin’ With Sunny” is giving her a wonderful opportunity to share thoughts about her favorite new discoveries.
More from this reviewer
PrevDorothy L. Sayers The Complete Stories
The Midwife Mysteries – Two from Sam ThomasNext