The Long Shadow: The Legacies of the Great War in the Twentieth Century

Every nation remembers the Great War differently. For some there was nothing “great” about it. For one of the victors, the United States, WW I, along with Korea, is a forgotten war or at best an unfortunate war. For the new Soviet Union, The Great War was relegated to an ideological trashcan. For Germany, it was the Great Shame. It is one of the delights and strengths of Reynolds’ The Long Shadow that he parses the national experiences of the various belligerent nations in subtle ways that allows us, a century later, to understand clearly that there are no easy generalizations about the 1914-18 catastrophe. The war’s meanings are still emerging and changing.

A century and a half ago, the German historian and philosopher Wilhelm Dilthey demanded of his students that they attempt to understand (verstehen) the past while accepting unequivocally that the understanding so gained would necessarily change over time. Thus, the meaning of a historical event changes, too. Broadly speaking, he wrote that there are three interconnected ways to understand the meaning of historical events: study contemporary evidence, study the effects of the events as discussed by subsequent generations, and study the writings of professional historians.

Reynolds historical treatment in Long Shadow implicitly incorporates some of Dilthey’s approach. In the book’s first half, Reynolds sorts out the legacies of the Great War for the participants, that is, what the Great War meant for them—soldiers, politicians, factory workers, poets, and artists. In the second half of The Long Shadow, Reynolds proceeds to write about how the next and succeeding generations have reacted to the Great War by refracting their observations through World War II. It is his most important argument: World War II fundamentally changed the way we give meaning to World War I. No matter how hard we try, we cannot entirely forget the ninety-five years since 1919 when describing or narrating events of the Great War. When we try to understand the Great War, we have to peer through the World War II looking glass, a distorting mirror. There were other distorting mirrors in the late 20th century, but World War II is most fundamental in Reynolds’s view.

What I find to be most intriguing in The Long Shadow, however, is Reynolds’s argument that Great Britain’s experience was different in most respects when compared to the other major belligerents. For example, we may be familiar with the view that the war produced a mountain of disaffected literature, particularly poetry, Wilfred Owen’s “Dulce et Decorum est” being the Mt. Everest. Not so fast! Reynolds compares literary output on the Continent and in the United States with that of Great Britain. Interestingly, he argues that the great disaffection is found more in Great Britain than in other places, an example of Britain’s singularity. But when we look at the British war poetry as a whole, we find that Owen was not representative. Most of the poetry written during the war remained firmly patriotic. Furthermore, Captain Owen in fact did not walk away from the war although he could have because of his shell shock. Ambiguously, he rejected the carnage and stupidity of the war but believed that it was ultimately meaningful. He felt the necessity to “carry on” by returning to the front where he died a week before the war’s end.

There is much in this book to chew on, in part because it is controversial, but also because Reynolds has incorporated a variety of different national perspectives. Reynolds will have likely offended some historians—all the more reason to read it. Doing so will help readers better understand the wider implications of the Great War rather than merely accepting the standard view that it was a prelude to World War II. – Neal Ferguson 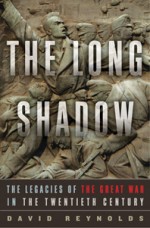 Neal Ferguson is a self described Anglo-phile. After studying for a PhD in British history and doing research for a year in various British archives, he came to the University of Nevada in 1970 to teach. Soon he found himself in administration where he remained until 2003. After returning to full-time teaching a decade ago, he decided to concentrate his teaching energies on Medieval British history and various global aspects of World War II. Dedicated to Ambrose Bierce’s proclamation that the purpose of war is to teach Americans geography, Neal insists that his students accompany him (in class) to sundry east European rivers and steppes, African deserts and jungles, south-east Asian mountain ranges and peninsulas, and small islands and coral reefs in the Pacific. Currently he is writing a book about the ups and downs of General Douglas MacArthur’s military reputation.
More from this reviewer
PrevThe Midwife Mysteries – Two from Sam Thomas
Wrath of the CaidNext