The Memory Of Old Jack 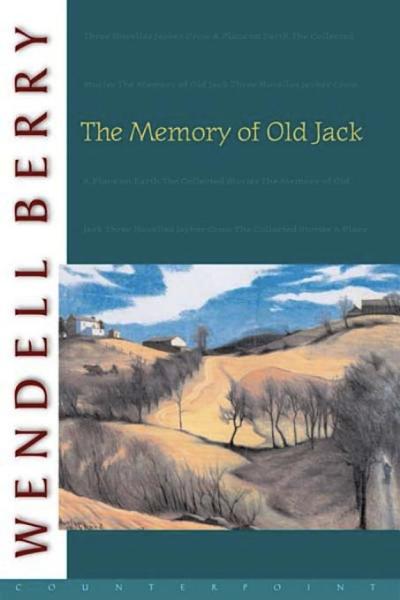 THE MEMORY OF OLD JACK

With the Stay-at-Home admonishment still in place for those of us well-beyond our 60th year, I’ve begun reaching for books on my shelves, books I thought I’d never get around to reading. Wendell Berry’s The Memory of Old Jack is one of those books. What a surprise to find all sorts of marginalia in my handwriting, indicating that I had once read Old Jack. However, bearing in mind that I am way past that 60-year-old age mentioned above, I figure it is the Almighty’s joke about my current ability to remember, and maybe it is time to re-read this particular book.

The novel takes place in one day. Within that one day, from the moment old Jack steps off the porch of the boardinghouse where he lives in his old age, until the moment he returns to the boardinghouse that same evening, eventually sitting in his favorite rocker facing his room’s only window, the reader will find out what his memory holds, all ninety-two-years of it.

The year is 1952. You do the math. Jack is old, and he does not live to see his ninety-third year. That is not a spoiler; if anything, such information is an enticement. The setting is the farmland and fictional town of Port William, in rural Kentucky. The novel sort of grows on the reader, as does Jack, himself. It meanders just like old Jack’s slow-paced trek through the day, stopping by shops, visiting people along the way, and seeing the farmlands beyond, each drawing him back to an earlier time.

If you’ve not read Wendell Berry before, be prepared to be swept off your feet. Early into Jack’s remembrances is the house he grew up in. This house, early in his life, already contains the loss of his mother and two brothers. The house is as much a character as is Jack himself. He remembers looking at it as a boy, when “Outside, away from the diminished and darkened house, there had already begun the long arrival of what was to be.” How many authors would dare give their readers the challenge to continue reading with such foreshadowing?

Old Jack has dreams, goals, successes, and failures. He has much to learn about the choices he makes. Through it all, his successes and failures, he maintains the friendships of many of the men and boys in his life. He is not so lucky with the women. Old Jack is not a complicated man, but rather, a man of complexity. The events which define Jack’s life: the stillborn birth of a son; the fire that wipes out his barn, his livestock; his dashing figure upon his horse as he rides into town for a Saturday night dance; the wife he misguidedly loves; his passion for his farm, all come at a cost.

I want to talk about what things came to mind as I re-read Old Jack. This is a man’s book. The men in it are hard-working, and those who are not are easily distinguished. They allow themselves a love for each other through a mutual love for the farmlands that define them, their labor they value, and the community that sustains them. In the novel, as they age, they make a pragmatic peace with the younger generation who will not return to the farms after high school or college. But an inescapable sadness exists for the reader who knows what that future holds.

I wonder, if young readers today were to read Jack’s story, would they find him a sympathetic character? He certainly has the entrepreneurial drive of today’s youth, but that drive is for the land, the acquisition of more land, and how well it can be farmed. Corporate farming was not imaginable. I wondered if men today have such relationships with each other? How does today’s near-death of small family farms and the communities in which they live affect their lives? And what would young female readers make of Wendell Berry’s women of Port William? He writes of Hannah Coulter, a farmer’s wife: “She is big. She feels big to herself, her breasts and belly swollen with life that is hers, yet greater than hers. Quick in her now is the life that has come like a pilgrim across the forgotten reaches of time, and is going on.”

The women in Jack’s world are identified and defined by their farm roles. Berry writes of his women with some of the same realism as the men, except I sense he is not so sure of their thinking. There are no cracker barrels or barbershop conversations for the women. And when he writes of Ruth, Jack’s wife, who loved their courtship, but not their marriage, Berry handles her persona with both empathy and consternation. Jack’s relationship with Rose, a local widow, is his first and only infidelity. Of all the women in this novel, only Rose is presented to the reader with a straightforwardness like that of the men, with independence and willingness to go after what she knows she wants.

Time and again, I felt deeply for Jack and the others in this novel. And why? I do not come from farmers; I do not know what it is like to almost lose a horse and wagon when crossing a raging river in a rainstorm. But I had a grandfather not so many years younger than Jack. I have pictures of my grandfather and his horse-drawn wagon in the city of Oakland. I know of the enduring friendships he had with his fellow Commercial Travelers. His horse’s name was Jack.

The Memory of Old Jack moved me to tears more than a few times. It reminds me again of why the age at which we read a novel can increase the depth of our understanding upon rereading, and our appreciation for writers whose work will outlive them, modernity or not.   –  Sunny Solomon

Also available by Wendell Berry: The Peace of Wild Things; The Unsettling of America; The Selected Poems of Wendell Berry; Jayber Crow; Hannah Coulter; What are People For?; A Place On Earth; The Art of the Commonplace; A Timbered Choir; Nathan Coulter; Andy Catlett; Wendell Berry Essays 1993-2017; What I Stand On, The Collected Essays. 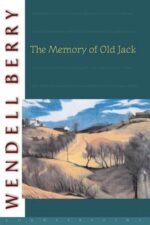 Sunny Solomon holds an MA in English/Creative Writing, San Francisco State University. She is a book reviewer for “The Clayton Pioneer” and her poetry and other writing has been published in literary journals, one chapbook, In the Company of Hope and the collection, Six Poets Sixty-six Poems. She was the happy manager of Bonanza Books, Clayton, CA and Clayton Books, Clayton, CA. She continues to moderate a thriving book club that survived the closure of the store from which it began. Sunny currently lives next to the Truckee in Reno, NV.
More from this reviewer
PrevRussian Winter
The Housekeeper and the ProfessorNext