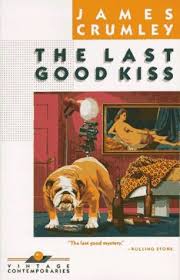 The path traveled to a book worth reviewing can be as circuitous as it can be direct. A friend can tell you about a “must read,” or a book reviewer can convince you to pick one title or another. James Crumley’s The Last Good Kiss came to me through a Shelf Awareness Book Brahmin interview. The guest brahmin, John Clarkson, is a novelist I’d never heard of, but from his picture, Clarkson appears to be a big guy, balding, moustached with goatee, hint of a smile and a straight-forward look behind glasses. He writes mystery thrillers, not my genre of choice, but the first question caught my eye: What is currently on your nightstand? I’d just blogged about the books on my own nightstand and although Clarkson’s nightstand books mostly did not interest me, the next question did, big time: Favorite book when you were a child? I certainly didn’t expect his answer to be Misty of Chincoteague. My favorite, too! That and every other book by Marguerite Henry until Peyton Place hit the stores. Clarkson liked the book for its adventure. Misty got me because of horses, and I can trace my love of history back to the Spanish Galleon that crashed off the Virginia coast, losing their horses to Assateague Island, the Chincoteague peninsula.

Now I moved down to Clarkson’s favorite authors and, BAM! Another hit: John Steinbeck. I’m thinking that whoever this Clarkson is, he’s cool. I also liked the guy for admitting “yes” when asked if he’d ever picked a book for its cover. I, too, had bought a book for its cover (just the cover, never read it), although I couldn’t immediately remember its title, only that it had a drooling bulldog slurping something from an ashtray on the floor. I have a thing for bulldogs as well as horses.

Then skipping to Clarkson’s favorite line from a book? It was the opening sentence of The Last Good Kiss: “When I finally caught up with Abraham Trahearne, he was drinking beer with an alcoholic bulldog named Fireball …..” What? Bells went off! I immediately went from bedroom to living room to the bookshelf with my small collection of “bulldog” books, and there it was! The Last Good Kiss! Well, what could I do but sit down and finish that opening sentence, “…Fireball Roberts in a ramshackle joint just outside of Sonoma, California, drinking the heart right out of a fine spring afternoon.”

And so, now, my book review of James Crumley’s classic The Last Good Kiss. Not only did I love this private eye mystery for its inclusion of Fireball, the beer slurping bulldog, but it also included a Volkswagon bug, my own beloved first car.

The novel is set in the West – everywhere from Montana to Colorado, Nevada, Oregon and California. The private detective, C. W. Sughrue, is a noir-mouthed dick who mostly works as a bartender when the market for lost spouses or children runs a bit dry. I can’t remember ever reading a detective story so jam-packed: missing beloved daughter; missing poet; sleazy attorneys; beer-drinking bulldog, porn film makers, a home for rescued women; crazy ex-wife; ditto for current wife; and double that for the poet’s mother. And what kind of story begins, reread that opening sentence, with the private eye finding the person he’s been paid to find? Well, yes, but then he loses Trahearne and the bulldog more than a couple of times. The missing daughter? “I didn’t have much of a picture of Betty Sue Flowers yet, but just the mention of her name seemed to drive grown men to drink.” Crumley’s plot complexity is topped only by his writing. I wasn’t sure if I was reading a book or watching a noir Bogey movie.

The search for Betty Sue fit into a time slot conveniently occurring before Sughrue could take Trahearne back home. Betty Sue’s mother owns the joint in Sonoma and she, the mother, is just one of many characters that no matter how much they may teeter on the stereotypical, we care about them. We care deeply. The bad guys are clearly bad and we hope they get theirs, but the good ones, those we really root for. Sughrue demands an apology from the sleazy attorney who, with false bravado, has threatened to call the police if Sughrue doesn’t leave his law office. From Sughrue: “I watched his face change hues about four times and examined shoddy dental work on his back lower molars.” While driving in Oregon, still looking for Betty Sue, he was “. . . following a washboard gravel road along a small creek that ran into the Applegate River.”

The plot has enough twists and turns, lies and truths to hold us to the end, which it turns out is not quite the end, but that would be telling. Maybe it was the bulldog, maybe the VW bug, or the pragmatic tenacity of Sughrue, but Crumley’s The Last Good Kiss caused a few tears and the understanding of why it remains a classic of its genre.

And now I feel honor-bound to get hold of John Clarkson’s latest, Among Thieves. One good turn deserves another. – Sunny Solomon 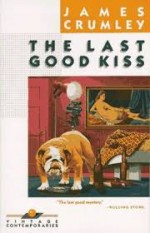 Sunny Solomon holds an MA in English/Creative Writing, San Francisco State University. She is a book reviewer for “The Clayton Pioneer” and her poetry and other writing has been published in literary journals, one chapbook, In the Company of Hope and the collection, Six Poets Sixty-six Poems. She was the happy manager of Bonanza Books, Clayton, CA and Clayton Books, Clayton, CA. She continues to moderate a thriving book club that survived the closure of the store from which it began. Sunny currently lives next to the Truckee in Reno, NV.
More from this reviewer
PrevAt the Water’s Edge
Sgt. RecklessNext