At the Water’s Edge 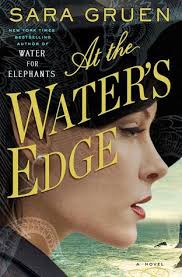 At The Water’s Edge

What an achievement—to create a shallow, dysfunctional narrative voice and then to make her story so absorbing that the reader actually enjoys watching her juvenile antics develop into a welcome maturity. Maddie Hyde, featured in Sara Gruen’s At the Water’s Edge, lives surrounded by superficialities and cloistered wealth. Married to a man even more imprudent, Maddie and her friends ignore the horrors of World War II and spend their hours in drunken stupors. On a lark, and suffering from dreadful hangovers, she and her husband and her husband’s best friend (two draft dodgers, for sure) decide to set sail for Scotland. Philadelphia holds no more charms; they’ll become famous by filming the Loch Ness Monster. Their venture, of course, is silly; but so are they.

Crossing the Atlantic on a freighter hauling supplies to Europe, they’re caught in a fire storm. A German U-boat attacks their convoy; their own ship must rescue the burned survivors. While Maddie looks on, shocked and horrified, Ellis and Hank remain oddly unaffected by the ghastly scene. Once they arrive in Scotland, the two men continue to act inappropriately. Whether they’re disdainfully interacting with the inhabitants of Drumnadrohit, or ignoring the news from France and Germany, or disrespecting Maddie herself, the two men prove to be foolishly, even malevolently, amoral.

Maddie, on the other hand, makes friends with the Scots villagers. She reads the newspapers and listens to the radio, and comes to understand the real winter of 1944-45, not the sequestered milieu of debutante New England. She cannot erase the chaos of the U-boat assault from her mind, and she increasingly cannot abide the quixotic stupidity of her companions. No longer the naïve young socialite, Maddie begins to change. That process is at the heart of At the Water’s Edge.

Sara Gruen is best-known for her bestseller, Water for Elephants, a novel I greatly admired. At the Water’s Edge is quite different but equally intriguing. Gruen is especially gifted at characterization. She is able to create flawed men and women whose foibles somehow move them toward unexpected acts. When I began reading At the Water’s Edge, I could not have predicted its denouement, nor could Haddie have anticipated what would happen in her future. Scotland proves to be a genuine eye-opener, as she breaks free from her childish constraints and learns to behave like an adult.

I can’t say more, particularly vis-a-vis Ellis and Hank, for I would give too much of the plot away. Suffice to say that Maddie’s own development is well-worth pursuing, as Gruen skillfully guides her from an arduous childhood (we learn about her upbringing in a series of recollections) to a final recognition of who she is becoming and will become. I wouldn’t call At the Water’s Edge a profound piece of fiction, but I would nonetheless recommend it. You’ll finally adore a Maddie you initially reviled, and applaud Gruen’s deft and skillful characterization.   – Ann Ronald 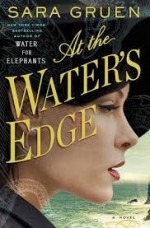 Ann Ronald is a retired English professor from the University of Nevada, Reno. Author of dozens of reviews, she’s also written a number of books about the American West. They include literary studies such as The New West of Edward Abby and Reader of the Purple Sage, cultural studies such as GhostWest and Oh, Give Me a Home, and nature writing such as Earthtones: A Nevada Album. Her latest is a work of fiction, Friendly Fallout 1953. Since retiring, she’s been reading vociferously, so “Bookin’ With Sunny” is giving her a wonderful opportunity to share thoughts about her favorite new discoveries.
More from this reviewer
PrevMen of War
The Last Good KissNext