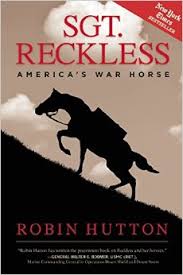 I came across “Sgt. Reckless, America’s War Horse” at a trade show last October. I hadn’t read a horse story since “Seabiscuit” and I am a sucker for any story about almost any horse, but “America’s War Horse?” Which war? Oh, Korean. I grew up in the fifties; why had I never heard of this horse? I remembered lots of racehorses, fictional and real, but not war horses. With a solemn promise to review the book, the sales rep parted with his only copy.

Sgt. Reckless was a U.S. Marine. Really. Before that, she was in training as a racehorse in Seoul, Korea. Another, really. Her name was Flame. She was a mare, small in stature, about 13 hands, red in color, with a white blaze, white stockings and a face as intelligent as any horse I’ve ever seen. “Most likely Flame was . . . a Hanna horse – a crossbred Cheju pony and Thoroughbred.” In October 1952, her young owner sold his beloved filly for 250 American dollars to the U. S. 5th Marines Anti-Tank Company. It was enough money to pay for a prosthetic leg for his mine-injured sister.

In 1955 Lt. Col. Andrew Geer wrote an in-depth story of Flame, including her pre-Marine life, in “Reckless: Pride of the Marines,” but Robin Hutton’s telling is “an up close and personal” account of this horse’s effect on the men of the Recoilless Rifle Platoon. The Recoilless anti-tank gun sat on a tripod, not wheels. Its weight was close to 115 lbs. and is described as “just a tube with a breach” that “could throw a 75 mm shell several thousand yards with extreme precision.” The recoil of this weapon was ferocious. Private John Newson said of it: “You would have to kneel down alongside of it when fired – nobody could stand behind it. It would cook a person.”

Flame was bought and trained to carry the Recoilless up and down steep terrain – extremely dangerous work because once fired it was an easy target for the enemy, requiring the men to move to another firing location as quickly as possible. Flame became “Reckless,” a perfect name for this small mare who risked her life time and again.

Reckless fought and played alongside her fellow Marines. She drank beer, ate peanut butter, and when the weather was bad, slept in the same tent as her handler. Hutton steps back and lets the men who served with this brave mare tell their Reckless memories, including her injury, her becoming an actual Marine and her hard-won right to return Stateside when the war ended. Almost as hard-won is the story of the effort to erect a memorial monument to Sgt. Reckless at the National Museum of the Marine Corps in Triangle, Virginia. A second memorial at Camp Pendleton, where Reckless lived out the rest of her life, is currently in the planning and funding stages. You can learn all about this at the Sgt. Reckless official website.

For horse-loving and military history readers, “Sgt. Reckless” is a must. It is a strong, descriptive narrative of a war less remembered and of the strong and lasting bond between humans and animals. Hutton’s book is a perfect family read. Everybody, moms, dads, kids, grandparents will want to talk about this little known chapter of American history. – Sunny Solomon 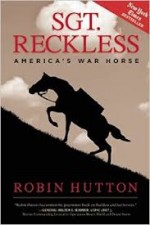 Sunny Solomon holds an MA in English/Creative Writing, San Francisco State University. She is a book reviewer for “The Clayton Pioneer” and her poetry and other writing has been published in literary journals, one chapbook, In the Company of Hope and the collection, Six Poets Sixty-six Poems. She was the happy manager of Bonanza Books, Clayton, CA and Clayton Books, Clayton, CA. She continues to moderate a thriving book club that survived the closure of the store from which it began. Sunny currently lives next to the Truckee in Reno, NV.
More from this reviewer
PrevThe Last Good Kiss
These is My WordsNext