The Feral Detective – Darker than noir

When I read Jonathan Lethem’s 1999 riff on dark detective fiction, Motherless Brooklyn, I was not amused. In fact, I found the novel absolutely wacko. His second such parody, published nearly twenty years later, is just as madcap, but somehow I found it more provocative and even sane in its insanity.The Feral Detective is just that, an oddball misfit named Charles Heist, an untamed human being living in a savage world. A seeker of lost persons, he takes in stray animals and orphaned human beings while he looks for others in the darkness and desert spaces of the twenty-first century.

So off they go, searching for Arabella while searching for themselves, too. And here The Feral Detective plot devolves, disintegrating into the mayhem and madness I mentioned earlier. The farther off the grid, the further the story decays. Let me give you just a hint of the chaos. First, there is the Buddhist retreat, with a mysterious Korean installation sitting nearby. Corpses ritually murdered languish behind the fence. Fast forward. Phoebe and Charles, a homeless camp set under a humming freeway, a plethora of lost souls. Then on to the desert, where rival communes camp out on the playas. Isolated from civilization, the Rabbits and the Bears have come to personify two modi operandi—one maternal, the other militant. Phoebe meets a range of hippy wannabes and witnesses unspeakable scenes.

You have to read the book to grasp the totality of the madness, but one event captured the disjunctures for me. The desert rats earn a minimal amount of money by trekking from one small desert town to the next, setting up an antiquated Ferris wheel and selling two-bit rides. When Phoebe sees it, the rusty contraption sits surrounded by sun and sand. Against her better judgment, up she goes. Swinging and swaying, her “cage” climbs to the top of the arc, and freezes. Hanging there, she can see the extent of the aging hippies’ separation from humanity, while the reader muses on Phoebe’s increasing isolation. Frozen in place, she mulls not only her quandary but the plight and blight of all she surveys. I didn’t much like what was happening, but I thought Lethem handled the metaphor perfectly.

That said, The Feral Detective is tough love, but I rather enjoyed reading it. Lethem writes well. He is especially gifted at depicting “grotesques” (a term often employed to describe Dickensian-like characters who are inherently peculiar, both in looks and in the ways they interact with polite society). I admired how the plot continually turned my expectations upside down, and of course the story is a sharply sarcastic riff on novels noir. For that alone, The Feral Detective deserves a read.
–   Ann Ronald

Also available by Jonathan Lethem: Motherless Brooklyn; The Fortress of Solitude; Chronic City; Dissident Gardens; Gun, with Occasional Music; The Ecstasy of Influence: Notifications, etc.; A Gambler’s Anatomy; Girl in Landscape; As She Climbed Across the Table; Amnesia Moon; You Don’t Love Me Yet; The Disappointment Artist; Men and Cartoons; Lucky Alan; The Wall of the Sky, the Wall of the Eye; More Alive and Less Lonely; on Books and Writers; Talking Heads’ Fear of Music; How We Got Insipid; Kafka Americana; They Live; Omega, The Unknown; This Shape We’re In; Ninety Percent of Everything; Gregory Crewdson; Believeniks! The Year We Wrote About the Mets; Fight of the Century, Writers Reflect on 100 Years of Landmark ALCU Cases; The Vision 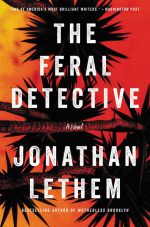 Ann Ronald is a retired English professor from the University of Nevada, Reno. Author of dozens of reviews, she’s also written a number of books about the American West. They include literary studies such as The New West of Edward Abby and Reader of the Purple Sage, cultural studies such as GhostWest and Oh, Give Me a Home, and nature writing such as Earthtones: A Nevada Album. Her latest is a work of fiction, Friendly Fallout 1953. Since retiring, she’s been reading vociferously, so “Bookin’ With Sunny” is giving her a wonderful opportunity to share thoughts about her favorite new discoveries.
More from this reviewer
PrevGerman Voices, deja vu?
Homegoing – Three hundred years of family tiesNext