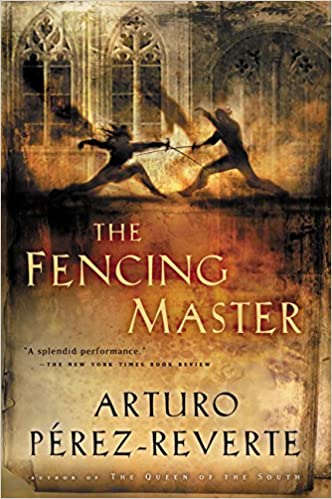 Spanish author Arturo Perez-Reverte and his translator, Margaret Jull Costa, have created a novel that may best be described as a living, breathing oxymoron. It accomplishes the impossible—a thoughtful, philosophical treatise overlaid atop such intense, powerful action that the reader is left gasping for breath.

The Fencing Master takes place in 1868, just as Spain was being roiled by what would later be called the Glorious Revolution, the deposition of Queen Isabella II from her throne. The novel’s protagonist, Don Jaime Astarloa, an aging fencing master of considerable repute, is nearing the end of his illustrious career. At the same time, now that prospective duelers find pistols more to their liking, the art of fencing is losing its cache. Attracting fewer and fewer aristocratic young men to his fencing classes, Don Jaime barely earns a living anymore.

Told in the third person but always through the consciousness of Don Jaime, The Fencing Master muses at length about diminishing respect for the aristocratic art of fencing and the tangential aging of Don Jaime. The two downhill spirals seem to coalesce. Meanwhile, Spain herself is undergoing an uneasy transformation. Her citizens are torn between aristocracy and democracy, between royal continuity, military might, and economic power. The old familiar monarchy is about to transition into something as yet undefinable, and Spaniards are as uneasy about the future as Don Jaime is about both his old age and the demise of classical fencing.

Into this mix steps Adela de Otero, a mysteriously evocative young woman who wants to be taught a complicated fencing move called the two-hundred-escudo thrust. Uneasy, for he has never before taught a female student, Don Jaime initially says no but finally agrees to her lucrative terms. When Señora de Otero appears in his studio the next day, he quickly learns that she is a master at fencing, too, better than most of his remaining students and quite a match for Don Jaime himself. For a while, then, the novel ricochets between the ancient master’s inner musings, the intense political conversations among Don Jaime’s churlish old friends who gather daily to discuss Spain’s future, and his ongoing fencing lessons, not only with Señora de Otero but with his other students, too.

By the end of Perez-Reverte’s very fine novel, the paths of Don Jaime’s existence have merged. Where he has always disdained politics, he is drawn into the national conflict and must make decisions about his own future and Spain’s as well. Perez-Reverte/Costa heightens the prose while intensifying the philosophical reflections that punctuate the dueling and swordsmanship. Señora de Otera plays an unforeseen role in this compression of thought and action, a role that ultimately clarifies both Don Jaime’s sense of history and his sense of self.

It’s been a while since I’ve read anything as metaphorically mind-wrenching as The Fencing Master. I’m surprised it didn’t receive major awards when it was first published in 1988. Now it merits reading and even rereading by anyone who relishes crossing swords with the passage of time and the elusive demise of classical honor. Don Jaime, writing his own unfinished manuscript about the art of fencing, has always sought “the most perfect thrust ever conceived by the human mind.” When he finds it, his book and his life will be complete. So, too, will Perez-Reverte’s The Fencing Master.  –  Ann Ronald

Also available by Arturo Perez-Reverte: The Queen of the South; The Club Dumas; The Flanders Panel; Seville Communion; What We Become; Purity of Blood; Captain Alatriste; The Sun Over Breda; The King’s Gold; Pirates of The Levant; Falco; The Man in the Yellow Doublet; The Painter of Battles; The Assassin’s Bridge; Cabo Trafalgar; The Siege. 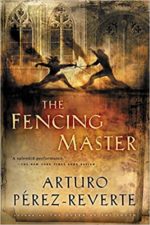 Ann Ronald is a retired English professor from the University of Nevada, Reno. Author of dozens of reviews, she’s also written a number of books about the American West. They include literary studies such as The New West of Edward Abby and Reader of the Purple Sage, cultural studies such as GhostWest and Oh, Give Me a Home, and nature writing such as Earthtones: A Nevada Album. Her latest is a work of fiction, Friendly Fallout 1953. Since retiring, she’s been reading vociferously, so “Bookin’ With Sunny” is giving her a wonderful opportunity to share thoughts about her favorite new discoveries.
More from this reviewer
PrevOrdinary Wolves
The Painter of BattlesNext