Home » Reviews » The Painter of Battles

The Painter of Battles 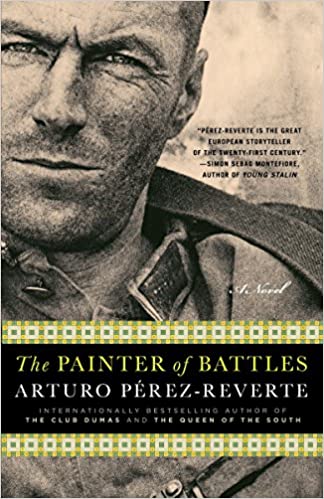 THE PAINTER OF BATTLES

A book worth reading is a book worth talking about, but not always. Arturo Pèrez-Reverte is Spain’s popular author of literary thrillers with a worldwide readership. The Painter of Battles, published in 2006, based on reviews, likely divide his fans. Ann Ronald’s most recently published BWS review of Pèrez-Reverte’s The Fencing Master describes the reasons behind the author’s popularity.

But Ann’s review last week got me searching for a copy of my review of Pèrez–Reverte’s The Painter of Battles, published in the Clayton Pioneer back in 2008; well before I retired from the bookstore, moved to Reno, and began Bookin’ with Sunny.

Here’s the premise:  Wartime photojournalist, Andres Faulques, has made a name for himself by clicking away at the faces of death, both victims and executioners, and decides to call it quits.  He has won awards for his stark and moving pictures of war, but after the death of his lover, he decides to pack away his camera and all things photographic.  He retires to the south of Spain in Cala del Arraèz to take up residence in a three-hundred-year-old, circular watchtower whose inside walls he now attacks with brushes and paint.  His inspiration comes from photographs he’s taken of battle paintings by some of the world’s greatest artists, displayed in museums around the world; photographs of not just the paintings but also the people viewing them.

That is the setting.  Now enters Ivo Markovic, a Yugoslavian Croat who was once the subject of a Faulques photograph taken as the man’s straggling unit retreats from a day’s battle. The photograph of Markovic portrays him as war-wearied, but dramatic in the face of defeat. The picture is widely printed and earns Faulques a European prize. But what does the photo, which becomes a symbol of all soldiers at war, bring to Markovic?  Defeat of the worst kind.  His face becomes known to his enemies and when the Serbs find his wife and young son, they are murdered with unspeakable brutality.  Markovic survives the ethnic cleansing, but not his taste for revenge. He has come to kill Faulques.

Markovic will not kill the painter of battles right away.  “I need for us to talk first; I need to know you better, to be sure that you realize certain things. I want you to learn and understand . . . . After that, I’ll be able to kill you.”  What is to understand?  War?  Man’s inhumanity? Art?  Photography? Responsibility?  Compassion? Brutality? All of the above, including Faulques thoughts that “Today’s children, tomorrow’s executioners.”

The novel often becomes mired in these conversations between the two men. Through flashbacks, we come to know the woman who was loved by Faulques.  Her name was Olvido, and although she was also a photographer, her subjects were things, not people.  Things like a flower in a field of death, the side of a house after heavy shelling, or something as human as a shoe or boot. We also know how, after the death of Ivo’s wife and young son, he comes to be consumed by his quest to find Andres Faulques and everything else he can learn about the man who handles a camera with the stealth and precision of a weapon.

Pèrez-Reverte has not written a cat and mouse thriller.  In some ways, he offers us a crash course in the history of battle art.  Such instructive excursions maddeningly slow the story’s already meandering pace.  As I read, I constantly wanted him to get on with it.  Whether Faulques is explaining the aperture, the lens, or the geometry of what the eye sees, the reader is left with scene after scene of killing in every part of the world.  These are the wars we have been watching on CNN for years – the dead of Africa, Asia, Iran, Yugoslavia, Pakistan, Bosnia, Herzegovina, Central, and South America.  Between this powerful and wrenching writing, we wait for Markovic to make his move.  The meetings between the two men always occur at Faulques’ watchtower.  They smoke together, drink coffee, drink brandy, and talk, and talk.  Just when we think we cannot stand another word about chaos, or linear points, or nature’s passion for destruction, we are reminded that the immediate killing has yet to happen. We sit up and pay attention.  Maybe, after all, it is a cat and mouse thriller.

The author raises questions worth pondering; never mind that there are no easy answers.  The story contains other elements as well.  Faulques suffers from some unidentified illness, which may take his life before Markovic does.  Late in the novel, a third character, a woman, enters in a curiously suggestive way – suggestive in the sense of a future.

How does a writer find his/her story?  Arturo Pèrez-Reverte was a war journalist before becoming a novelist.  Early in the story, one of Faulques’ prize-winning photographs is identified and then described in greater detail some eighty pages later.  At the time I read those two passages, I had no idea how imbedded that image would become in my mind.  A week or two after finishing the novel, I was going through some books in-trade at the bookstore.  One book happened to be a photojournalism collection.  I thumbed through the pages until stopped by one particular picture taken in Iran in 1979 at the time of the fall of the Shah — a photo of prisoners being executed at close range.  One man, the last left standing, stood tall and defiant.  “….erect and strong, was stoically awaiting the bullet that hadn’t as yet been fired, head high, eyes covered with a black cloth, a wounded hand supported in a bandage slung around his neck and tight against his chest.”  Except for the cloth in the photograph being white and its time and place quite different, it was very nearly the same picture composed by Pèrez-Reverte’s words in The Painter of Battles.  The collection’s photograph won a Pulitzer prize, yet the photographer, for his own protection, remained anonymous.  I think Pèrez-Reverte must have seen that same photograph, and I imagine him wondering what might have happened to that unidentified photographer had his name been revealed?   – Sunny Solomon 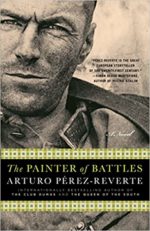 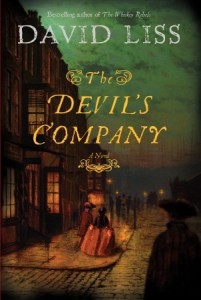 The Devil’s Company – History, mystery, thrills and chills in 1722 London. I can’t imagine why it’s taken me so long to climb on the

Sunny Solomon holds an MA in English/Creative Writing, San Francisco State University. She is a book reviewer for “The Clayton Pioneer” and her poetry and other writing has been published in literary journals, one chapbook, In the Company of Hope and the collection, Six Poets Sixty-six Poems. She was the happy manager of Bonanza Books, Clayton, CA and Clayton Books, Clayton, CA. She continues to moderate a thriving book club that survived the closure of the store from which it began. Sunny currently lives next to the Truckee in Reno, NV.
More from this reviewer
PrevThe Fencing Master
Rebel CinderellaNext