Home » Reviews » The Consolations of Philosophy

The Consolations of Philosophy 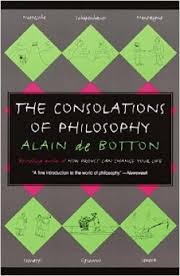 THE CONSOLATIONS OF PHILOSOPHY, A PRIMER FOR THOSE WHO DID NOT STUDY PHILOSOPHY

I think, therefore, I am. Descartes, right? And if wrong, it shows my education lacks rudimentary philosophy. If, however, I’m right, it goes to show that when necessary, I can drop at least one philosophical plum. For those of us who did not study philosophy, but through life can recognize at least the title of Plato’s Dialogues, I heartily recommend Alain de Botton’s The Consolations of Philosophy.

The other day, when attempting to redeem a $10 coupon at my favorite bookstore, I was told the book I was paying full price for didn’t qualify for coupon redemption unless I added another book to bring the total to $25. Frustrated, I headed to the used books and started browsing. Facing out, demanding notice, was The Consolations of Philosophy by Alain de Botton. Hmm, a book demanding attention while offering consolation at a price I could afford? de Botton had also written How Proust Can Change Your Life, a book which didn’t work for me, but this title was no-nonsense enticing. Everybody can use a little consolation, and four of the six philosophers de Botton includes in this slight volume were actually pretty familiar to me: Socrates, because I knew about Hemlock; Epicurus because of the gastronomy of good food; Seneca, because (being exiled to a small island) he was a model for Shakespeare’s Prospero (and I have studied The Tempest); Montaigne, because he, too, was tied to The Tempest through Caliban and somewhere along the way I had picked up a copy of his Essays (sworn to be read at a later date). I’ve always steered clear of Nietzsche for fear of mispronouncing his name and Schopenhauer is the only one I knew nothing about beyond name recognition.

I liked the blurb from the San Francisco Chronicle saying the book was “Funny and very refreshing.” To be consoled with humor is hardly something to pass up and I very philosophically bought it, thus qualifying me for my $10 coupon. My review might not be for everyone, but if you are among the people intimidated by philosophy-speak, such conversations might as well be in Latin or Greek, this book is a treasure. I lost my Latin after Vatican II with the introduction of the vernacular Mass, and my marriage to a Greek was no more successful than my understanding Plato’s version of the Socratic method.

Here’s the first of de Botton’s enlightenments: philosophers can be funny. I’m not sure that includes Socrates, Plato, or Schopenhauer (especially Schopenhauer) but Seneca and Montaigne certainly knew enough about real life to recognize humor. Who knew my children, when very young and hysterical over words like “poo-poo and fart,” were budding philosophers?

de Botton superbly breaks his text into six chapters titled after very human concerns: I. Unpopularity; II. Not Having Enough Money; III. Frustration; IV Inadequacy; V. A Broken Heart; VI. Difficulties. In addition to “come-hither” chapter titles, Consolations is wonderfully illustrated with famous art, understandable graphs, photographs of people, places, and even an attractive restaurant plate of food, one that has probably been seen on Facebook. Each of the six philosophers makes their way from a world of the ancients amid multiple gods to a more modern, familiar monotheistic world. Folks still may not want to hear what Socrates has to say, but with humorous insight and deft hand de Botton’s brings us closer to what twenty-first-century readers might discover – that there is a place today for reading the philosophers, and not just in a classroom.

I finished reading the book on a Sunday afternoon and, feeling mighty consoled; I seriously considered skipping evening Mass at the local Newman Center. As Fortunate would have it, the name of the church is Our Lady of Wisdom and, philosophically, I thought attendance could not hurt. The power of de Botton’s Consolations is that it opens windows and even doors in which this reader now feels compelled to look through and, with a lot more reading and spirited conversation, maybe even to walk through. – Sunny Solomon

Also available by Alain de Botton: The Course of Love; The News: A User’s Manuel; Art as Therapy; How to Think More About Sex; Religion for Atheists; The Pleasures and Sorrows of Work; A Week at the Airport; The Architecture of Happiness; Status Anxiety; The Art of Travel; How Proust Can Change Your Life; Essays in Love. 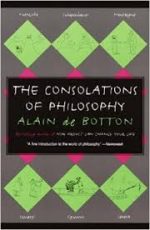 Sunny Solomon holds an MA in English/Creative Writing, San Francisco State University. She is a book reviewer for “The Clayton Pioneer” and her poetry and other writing has been published in literary journals, one chapbook, In the Company of Hope and the collection, Six Poets Sixty-six Poems. She was the happy manager of Bonanza Books, Clayton, CA and Clayton Books, Clayton, CA. She continues to moderate a thriving book club that survived the closure of the store from which it began. Sunny currently lives next to the Truckee in Reno, NV.
More from this reviewer
PrevHillbilly Elegy
The Burning HourNext