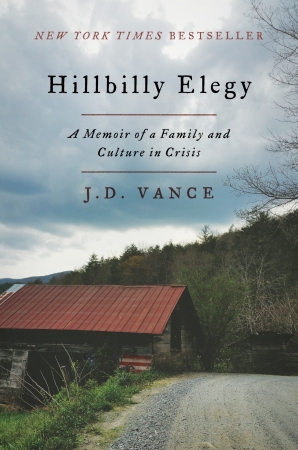 HILLBILLY  – A MEMOIR OF FAMILY AND A CULTURE IN CRISIS:

Traditionally, an elegy is a poem or song of lamentation. Although neither a poem nor a song, Hillbilly Elegy is certainly a lament. Vance mourns for the “ordinary” family he never had as well as for the poor Scots-Irish culture of Appalachia (and diaspora northwards) that has been self-destructing for the past half century. His memoir never surrenders to despair, however. It is firmly rooted in the long American tradition of optimism and of pursuing the American Dream, overcoming obstacles, being upwardly mobile, and taking personal responsibility. At the same time, Hillbilly Elegy recognizes the fundamental importance of supportive social networks—of family, friends, professors, and even Marine Corps superiors. His book is also testimony to the extent we Americans have tempered our naïve beliefs in the “melting pot.”

“Hillbilly” or “white trash” it may have been, but Vance emerged from a truly bizarre family. Clearly, he has attempted to come to terms with his family, a family that he loves but one, at times, that he has to resist apologizing for or simply denying. He often finds himself perched on the thin edge of ambivalence, an understandably precarious balancing act that involves his escaping without rejecting.

If you want to understand Donald Trump’s appeal to poor, working-class and white Americans, read this book. Although Vance’s personal experience is extreme compared to mine, and his geography is Kentucky and Ohio while mine is Oklahoma and Kansas, his generalizations ring true for me. I recognize him and the people he writes about. He knows their politics; so do I.

Putting aside the current political carnival, J.D. Vance’s memoir is memorable even if he is only thirty-two. He writes well with exceptional nuance. In part, his elegy is memorable because he had a pistol-packing grandmother like no other I’ve ever heard or read about. Her favorite word appeared to have been “fuck.“ His mother was a poster child for man-of-the-month club, drug abuse, and other bad choices. He was surrounded by real and potential violence. His family’s, his friends’, and his own anger could escalate from “zero to murderous in a fucking heartbeat.” And although he doesn’t marquee the fact, he won the genetic lottery for brains.

The sociological, economic, and psychological context—the wider cultural milieu—provided by his lengthy discussions are insightful and smoothly integrated with his personal narrative. While they give Hillbilly Elegy added relevance and impact, I found myself more interested in his assessment of why he was able to transcend Hillbilly culture. He resists ascribing his success to self-help and pulling himself up by the bootstraps; this is not an Ayn Rand tract. In a word, he says that he was “lucky” (in many ways) until he joined the Marine Corps. There, he began to learn the life skills that allowed him to start the challenging business of creating his own luck by working hard and applying his capacious intellect.

It’s difficult for me to object too strenuously to an author for expressing some of his deepest feelings with honesty and eloquence. Nevertheless, I think he is in denial about the role that race plays in white Hillbilly bitterness. While he often compares the similarities between the experiences of poor blacks and poor whites, he resists examining how Hillbillies may believe that blacks are part of their problems. When applying for Yale Law School, one of his relatives diminished Vance’s chances by pointing out that he was neither black nor liberal. Vance doesn’t pause to examine the possible implications of the comment. This caveat aside, read J.D. Vance’s, Hillbilly Elegy. You will be amazed. -Neal Ferguson 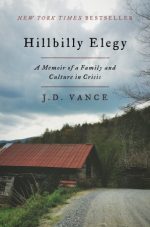 Neal Ferguson is a self described Anglo-phile. After studying for a PhD in British history and doing research for a year in various British archives, he came to the University of Nevada in 1970 to teach. Soon he found himself in administration where he remained until 2003. After returning to full-time teaching a decade ago, he decided to concentrate his teaching energies on Medieval British history and various global aspects of World War II. Dedicated to Ambrose Bierce’s proclamation that the purpose of war is to teach Americans geography, Neal insists that his students accompany him (in class) to sundry east European rivers and steppes, African deserts and jungles, south-east Asian mountain ranges and peninsulas, and small islands and coral reefs in the Pacific. Currently he is writing a book about the ups and downs of General Douglas MacArthur’s military reputation.
More from this reviewer
PrevUnder the Harrow
The Consolations of PhilosophyNext