Home » Reviews » Fiction » Under the Harrow 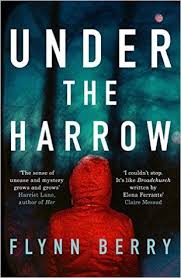 UNDER THE HARROW  –  A HARROWING TALE OF GRIEF

Flynn Berry adopts her title from a C. S. Lewis classic, A Grief Observed: “Come, what do we gain by evasions?” he wrote. “We are under the harrow and can’t escape.”  Just as Lewis probes the physical and psychological depths of grief in a philosophical fashion, so Flynn Berry expresses the powerful stresses and strains of grief in fictional form. Under the Harrow begins as Nora, expecting to visit her sister Rachel for a countryside weekend, instead discovers a savaged English cottage and her sister’s blood-stained corpse. The remainder of the novel follows Nora’s subsequent obsessions and pursuits.

Nora not only follows step by step the police and their inquiries, she also tracks down possible perpetrators and stalks them. She traces Rachel’s footsteps, too, revisiting places the two sisters vacationed in the past and finding unexpected locales where Rachel has recently been seen.  Consumed by her sister’s murder, Nora disintegrates “under the harrow” until she is nearly incapable of functioning in the real world. There is a kind of logic in her madness, however, as she draws closer and closer to whoever must have committed the crime.

Or crimes. Many years earlier, Rachel was the victim of a random attack, a brutal beating that was never solved.  Apparently the two sisters together obsessed about that occasion, and so Nora’s search for Rachel’s murderer parallels the sisters’ previous investigation. In fact, Nora conflates the two events, seeking common threads and a common perpetrator. Even the police recognize the odds against two such brutal encounters against a single victim, so they also unearth old cases and investigate imprisonments. But it is Nora who is fixated on the two together.

Berry’s portrayal of Nora’s absorption is artistically complicated. The Author designed her book in three parts. The first, titled “Hunters,” sets the police procedures in motion and starts Nora down her nearly neurotic path. The second, “Marlow,” takes place in the English town of Marlow where Rachel lived and where Nora moves to be closer to the scene of the crime and to anyone who might have been the killer. The third, “Foxes,” heightens her spiraling mental state as she narrows her focus.The umbrella arching over the three parts is, of course, Nora’s own status “under the harrow,” where she cannot escape.

Berry renders all of Nora’s compulsions in a terse minimalist prose. Her words hammer at the reader, while her declarative sentences march rapidly from one encounter to the next. At the same time, Berry is wonderfully descriptive, placing the reader in a physical context that brings Marlow and its wintry surroundings into icy light.  The syntax is carefully chosen to reveal place, as well as persona, and Berry succeeds in depicting both with equal force. “I walk faster, my breath warming my chest, my cold fingers curled in my pockets. Heavy clouds mass overhead, and in the quiet the air takes on a tinnitus ring.”

Nora moves through this frigid world on a chilling odyssey. Not only does she uncover Rachel’s secrets, she also confesses her own. As time passes, the reader wonders more and more about those secrets. Are there more enigmas that might solve Under the Harrow’s mysteries? Flynn Berry has written a tightly woven thriller filled with unexpected alleys and byways, one that a reader won’t soon forget. I recommend her novel highly.  – Ann Ronald

Under the Harrow is Flynn Berry’s debut novel. 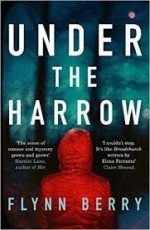 Ann Ronald is a retired English professor from the University of Nevada, Reno. Author of dozens of reviews, she’s also written a number of books about the American West. They include literary studies such as The New West of Edward Abby and Reader of the Purple Sage, cultural studies such as GhostWest and Oh, Give Me a Home, and nature writing such as Earthtones: A Nevada Album. Her latest is a work of fiction, Friendly Fallout 1953. Since retiring, she’s been reading vociferously, so “Bookin’ With Sunny” is giving her a wonderful opportunity to share thoughts about her favorite new discoveries.
More from this reviewer
PrevGirl in the Blue Coat
Hillbilly ElegyNext