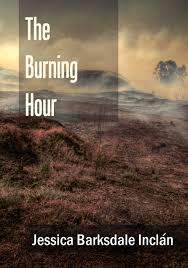 Reading The Burning Hour reminds me of sitting outside on an arid Nevada afternoon, when thunderheads build over the mountains and hot, dry winds burst off the playa. Anything—a stab of lightning, a spark from a rifle, even an overheated car driving across a patch of desiccated grass—can set off a conflagration of smoke and flames. That same tension, that crackling anticipation sets The Burning Hour’s pace. You know the fire is coming; you don’t know where or when. Nor do you know who or what will survive the inferno’s damage.

Jessica Barksdale Inclán sets The Burning Hour in an imaginary Kellogg City, a rough combination of Carlin and Elko in northeastern Nevada. Summer has brought unbearable heat and low humidity to the land, and three years of drought have turned the high desert into a tinder box. Nick Delgado, a first-year wildland firefighter, anticipates trouble, fears he might falter, but trusts in his instincts and his training. The reader is often inside his head, as Nick struggles with his feelings for the girl he left behind and with his commitment to his chosen career. Any reader will intuitively connect with the insecurities of this sensitive but strong young man. His narrative, however, is only part of the story.

Much of The Burning Hour centers on the Mapp sisters, who live on a ranch in Crescent Valley and whose family has been embroiled in a property dispute with the federal government for generations. Inclán took the inspiration for Wanda and Birdie Mapp from the real-life Dann sisters, Mary and Carrie, two Western Shoshones who never relinquished their tribal claims. The Mapp sisters are fictional renditions, and the action of this novel does not replicate history. The Burning Hour spirit is accurate, however, as Inclán explores the plight of modern-day Shoshones caught between their Indian-ness and their need to co-exist with a predominantly white milieu. She probes not only the elderly sisters and their peers but also the motivations and aspirations of the younger generations.

So Inclán’s novel braids several important narrative strands. The fear of fire hangs over questions of property rights and the historic treatment of Native Americans by the government of the United States. Teasing those strands apart and then knitting them together is a very twenty-first century persona, a blogger transplanted from Boston to Kellogg City. Em Donnelly gets to know the Mapps, appreciates their dilemma, and writes with a sophisticated sensibility. Trying to familiarize herself with her new Nevada home, she gets to know the firefighters, too. Since they work for the BLM, the Mapps loathe their presence on the land. But Em helps bridge the awkwardness in ways that sound quite credible to me.

I’m always fussy about Nevada novels, so I read them with my ears attuned for assonance. Although I occasionally would have excised an adjective or two, I found Inclán’s landscape well mirrors the real Crescent Valley and the nearby basin and range country where I have camped so many times. I also appreciated the way she built The Burning Hour to its inevitable climax. From the first page it is obvious that a wildfire will occur. But by moving back and forth between the firefighters and the Mapp family, with Em’s interpretive asides, Inclán generates an unpredictable tension. “He almost moaned when he felt it again, that same subtle shift of air, the wind curling around him, the fire headed the wrong way again.” So the novel shifts and shimmers, bursts and burns.   Ann Ronald

A 2008 documentary, American Outrage, reports the course of the Dann sisters’ stand-off with the American government. The archives of the Western Shoshone Defense Project, which detail their years of judicial conflict, can be found at the University of Nevada, Reno, Special Collections, https://library.unr.edu/SpeColl/Index

Also available by Jessica Barksdale Inclán: Her Daughter’s Eyes; The Matter of Grace; One Small Thing; Walking with Her Daughter; When You Believe; When you Go Away; How to Bake a Man; The Instant When Everything is Perfect; The Beautiful Being; Intimate Beings. 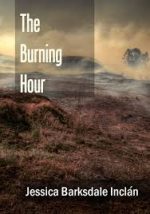 Ann Ronald is a retired English professor from the University of Nevada, Reno. Author of dozens of reviews, she’s also written a number of books about the American West. They include literary studies such as The New West of Edward Abby and Reader of the Purple Sage, cultural studies such as GhostWest and Oh, Give Me a Home, and nature writing such as Earthtones: A Nevada Album. Her latest is a work of fiction, Friendly Fallout 1953. Since retiring, she’s been reading vociferously, so “Bookin’ With Sunny” is giving her a wonderful opportunity to share thoughts about her favorite new discoveries.
More from this reviewer
PrevThe Consolations of Philosophy
Sapiens: A Brief History of HumankindNext