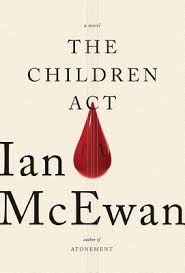 A woman who specializes in family court cases, divorce settlements, and child welfare, finds her own marriage in trouble and her own judgment questionable.This is the setup for Ian McEwan’s The Children Act, which follows a season in the life of Fiona Maye, a British High Court judge. Fiona’s serenity implodes when her husband of more than thirty years announces that he needs more sexual excitement and would like her permission to embark on an affair with a younger woman. His determination, for good reason, confounds his wife. She asks him to leave their home, changes the locks, and continues her life judiciously.

At the same time, a series of difficult cases comes before her, including one particularly problematic confrontation. A Jehovah’s Witness boy is dying, and due to their religious beliefs his parents are refusing to allow life-saving blood transfusions. The young man concurs. So the hospital and the attendant child welfare programs go to court, asking the judge to overrule the family decision. Fiona balances both sides fairly, studying established law for similar cases and similar pronouncements and even going to the hospital to talk with young Adam. Once her decision is made, The Children Act cascades into an ongoing series of related incidents and interactions.

Now I want to put on my professorial hat, and write a paragraph or two about pacing. Part of what makes The Children Act so effective and so powerful is McEwan’s ability to speed up and slow down the plot and his language conveying the plot. Whenever Fiona is in court, or studying legal cases, those litigants and plaintiffs and judgments come at the reader in pell-mell fashion. Just as she must constantly switch gears from one situation to another, so McEwan’s prose echoes the rapidity of Fiona’s mind. She doesn’t have time for second-guesses. Then, when Fiona is left to contemplate her verdicts, either about her husband’s infidelity or about Adam’s fate, McEwan slows the pace accordingly. Just as Fiona turns inward, thinking deliberately and slowly, so McEwan’s prose follows similar introspective rhythms.

The Children Act moves accordingly, swift sentences and hasty steps alternating with leisurely interior monologues and the sorts of intuitive reconstructions one makes when lying sleepless in the middle of the night. I always admire talent, and Ian McEwan is indeed a talented writer of English prose. In his hands, every movement of The Children Act sounds just right., an orchestrations of emotions that thoroughly moves the reader. I also appreciate McEwan’s tone. It touches all of Northrup Frye’s literary genres, sometimes romantic, sometimes comic, sometimes tragic, often quite ironic. These emotions never clash, however. Instead, they meld seamlessly. In life outside of fiction, a single day may move fast or slow, and one hour’s soft feelings may give way to another hour’s trauma. That’s the way The Children Act paces itself, orchestral prose dramatizing a reverberation of genuine life. – Ann Ronald

Also available by Ian McEwan: Atonement; Sweet Tooth; On Chesil Beach; Enduring Love; The Cement Garden; The Child in Time; The Comfort of Strangers; Black Dogs; Fir Love, Last Rites; The Innocent; The Daydreamer; In Between the Sheets and other Stories; Amsterdam; Saturday; Solar; Rose Blanche; a move Abroad; For You; Dead as They Come. 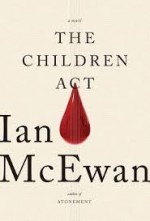 Ann Ronald is a retired English professor from the University of Nevada, Reno. Author of dozens of reviews, she’s also written a number of books about the American West. They include literary studies such as The New West of Edward Abby and Reader of the Purple Sage, cultural studies such as GhostWest and Oh, Give Me a Home, and nature writing such as Earthtones: A Nevada Album. Her latest is a work of fiction, Friendly Fallout 1953. Since retiring, she’s been reading vociferously, so “Bookin’ With Sunny” is giving her a wonderful opportunity to share thoughts about her favorite new discoveries.
More from this reviewer
PrevGranada
One Summer: America 1927Next