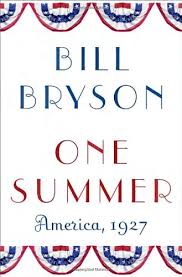 As advertised in the title, 1927 is the hook that Bill Bryson embeds in his engaging historical perspectives. If you are already familiar with Bryson, you know him to be an interesting non-fiction writer whose passions encompass travel, old houses, science, Des Moines, the Appalachian Trail, and odd historical topics. One Summer: America, 1927 is decidedly historical.

Not for him the usual historical categories of politics, economics, and society, however. Instead he discusses floods, baseball, murderers, a mountainous sculpture, a laconic president, mobsters, prohibition, talking pictures, and trans-Atlantic aviators. You may already be able to associate famous names with these categories, but if you can’t, you’ll soon be reminded and have some delightful déjà vu moments. You may also conclude that for youngsters in the summer of 1927, it must have been intensely absorbing and the most exciting summer of their childhood.

Bill Bryson writes entertaining books and One Summer is no exception. He opens the summer of 1927 in mid-Spring with the $25,000 challenge prize for the first person(s) to fly non-stop across the Atlantic, from New York to Paris. Unless you are an aviation buff, you may not have heard of Charles Levine, René Fonck, or Richard Byrd, all aviators. Similar to other “new-new things,” aviation, then in its teen-age years, attracted a wild international assortment of serious fliers, adrenaline charged adventurers, publicity seekers, charlatans, and entrepreneurs (not all these categories are mutually exclusive). The America to Paris challenge brought out the best and worst in all of them. The big surprise, ironically enough, was that an unknown, financially strapped, wholesome, shy and preternaturally gifted pilot and navigator named Charles Lindbergh won the prize. Aboard the Spirit of St. Louis, he took off in the dead of night to beat his would-be opponents into the air, to Paris, and into history, not to mention glory, fame, and fabulous wealth.

That was in May. Bryson covers other May topics in his evolving kaleidoscope, but soon moves onto June, July, August, and September, each month a chapter of One Summer. Bryson’s method appears to introduce the reader to several famous persons and events in each chapter and then to keep the stories caroming precipitously along in each of the succeeding months. Although Lindbergh is given his apotheosis in May, we are given updates and more entertaining stories in each of the successive months. The same applies to Babe Ruth, already a prodigious cultural force by 1927. Some contemporaries claimed that Ruth’s remarkable talents on the diamond were in decline by 1927. They were wrong. As the summer arrived, peaked, and then began to fade into fall, the King of Swat’s impact grew to near supernatural proportions.

While entertaining, Bryson delivers well-researched history in scintillating prose. Almost effortlessly, he chisels out memorable sentences such as when describing the wealthy but feckless 1927 mayor of Chicago, William Hale Thompson as “an oaf from head to toe and ear to ear, but his supporters never held that against him . . . because he never got in the way of corruption or the making of money.” Bryson summarizes: “Chicago was to corruption what Pittsburgh was to steel or Hollywood to motion pictures.” Bryson has wit aplenty, a sharp vocabulary, and perceptive judgment for the perfect anecdote. – Neal Ferguson

Also available by Bill Bryson: A Short History of Nearly Everything; A Walk in the Woods, Rediscovering America on the Appalachian Trail; Notes from a Small Island; At Home, A Short History of Private Life Illustrated; Neither Here Nor There, Travels in Europe; The Lost Continent, Travels in Small-Town America; The Mother Tongue, English and How it Got that Way; Shakespeare, The World as Stage; Made in America; I’m a Stranger Here Myself; Bryson’s Dictionary of Troublesome Words; Bill Bryson’s African Diary; Bill Bryson, the Complete Notes; Bizarre World; The English Landscape; Walkabout; The Life and Times of the Thunderbolt Kid; A Really Short History of Nearly Everything; In A Sunburned Country. 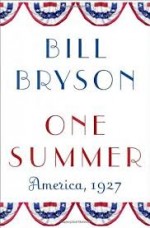 Neal Ferguson is a self described Anglo-phile. After studying for a PhD in British history and doing research for a year in various British archives, he came to the University of Nevada in 1970 to teach. Soon he found himself in administration where he remained until 2003. After returning to full-time teaching a decade ago, he decided to concentrate his teaching energies on Medieval British history and various global aspects of World War II. Dedicated to Ambrose Bierce’s proclamation that the purpose of war is to teach Americans geography, Neal insists that his students accompany him (in class) to sundry east European rivers and steppes, African deserts and jungles, south-east Asian mountain ranges and peninsulas, and small islands and coral reefs in the Pacific. Currently he is writing a book about the ups and downs of General Douglas MacArthur’s military reputation.
More from this reviewer
PrevThe Children Act
How the Scots Invented the Modern WorldNext