Home » Reviews » History » How the Scots Invented the Modern World

How the Scots Invented the Modern World 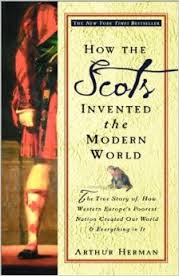 Readers of Scottish ancestry should not miss Arthur Herman’s How the Scots Invented the Modern World. His thesis confirms what my bagpipe-loving father and my Highland/Glaswegian grandparents insisted throughout my youth – Scots are special. We should be very proud of our heritage; we must always strive to uphold the high standards that characterize our ethnicity. Now Herman has added a third caveat – modernity owes much of its success to Scotsmen. We should be very proud indeed.

Herman summarizes Scottish contributions in the final paragraph of his intriguing book, writing that “the Scots have by and large made the world a better place. They taught the world that true liberty requires a sense of personal obligation as well as individual rights. They showed how modern life can be spiritually as well as materially fulfilling. They showed how a respect for science and technology can combine with a love for the arts; how private affluence can enhance a sense of civic responsibility; how political and economic democracy can flourish side by side; and how a confidence in the future depends on a reverence for the past.” How the Scots Invented the Modern World both analyzes and describes how the Scottish Enlightenment and its enlightened heirs influenced generations of professors, clerics, scientists, engineers, entrepreneurs, politicians, and men of letters.

The early chapters analyze the intellectual history of eighteenth-century Scottish thinkers, explaining how they built upon one another’s ideas and how they created a middle-class educational philosophy that spilled into many practical areas of human endeavor. A few chapters assess historical trends, too, freely admitting some egregious moments in Scottish history while praising the outcomes when practical Scotsmen moved on from chaotic failures to ultimate successes. Later chapters turn more toward summary than analysis, as Herman describes the accomplishments of Scotsmen who triumphed around the globe. Always, however, he connects those later achievements to the Scottish ethos that preceded them. Whether discussing educational theories, scientific discoveries, or global colonization, Herman reinforces a cultural pragmatism that sounded very familiar to me.

I learned a lot from How the Scots Invented the Modern World. Many of the ideas and the Scottish figures were familiar to me, as were many of the concepts from Enlightenment, but I had never contextualized the cultural connections that Herman fits together. Herman is trying to prove a point, to be sure, so may be exaggerating some of the accomplishments. On the whole, however, I found his arguments quite convincing. Plus, I learned many bits of trivia that were wonderfully apropos, such as the etymology of words like cracker and redneck and limey; or more profound ideations, like the philosophical underpinnings of a liberal arts education.

My father would have adored this book, for he never outgrew his Celtic pride. He would crank up the bagpipe music whenever my mother left the house. When he and I were alone together, he would recite countless Robbie Burns’ poems from memory and would sing the old songs he remembered from his Scottish boyhood. My grandmother’s beautiful clear soprano echoed in our ears. How the Scots Invented the Modern World is a book to savor, alongside those memories. It’s a big book, both physical and intellectually. But it’s a book worth reading, especially for those whose Scottish roots run deep. (As an aside, I’ve been told that my family can trace its heritage back to the eleventh century, when evidently Clanranald was led by one of the bloodiest Highland chieftains of all. Need I say more?)   – Ann Ronald

Also available by Arthur Herman: The Cave and the Light: Plato vs. Aristotle, and the Struggle for the Soul of Western Civilization; Gandhi and Churchill: The Epic Rivalry that Destroyed an Empire and Forged Our Age; Freedom’s Forge; To Rule the Waves: How the British Navy Shaped the Modern World; The Idea of Decline in Western History; Joseph McCarthy: Reexamining the Life and Legacy of America’s Most Hated Senator. 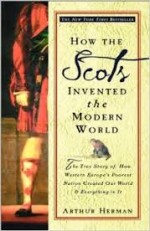 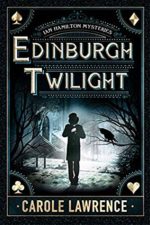 EDINBURGH TWILIGHT As soon as I discover I’m reading a mystery that involves a serial killer, especially if the murders sound gruesome, I put the

Ann Ronald is a retired English professor from the University of Nevada, Reno. Author of dozens of reviews, she’s also written a number of books about the American West. They include literary studies such as The New West of Edward Abby and Reader of the Purple Sage, cultural studies such as GhostWest and Oh, Give Me a Home, and nature writing such as Earthtones: A Nevada Album. Her latest is a work of fiction, Friendly Fallout 1953. Since retiring, she’s been reading vociferously, so “Bookin’ With Sunny” is giving her a wonderful opportunity to share thoughts about her favorite new discoveries.
More from this reviewer
PrevOne Summer: America 1927
Darwin’s SwordNext