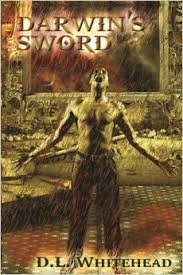 Two-thirds of the way through his science fiction novel, Darwin’s Sword, D. L. Whitehead acknowledges a Frankenstein parallel. Long before that, I had already decided that a more appropriate title for his book would have been “Frankenstein’s Doppelganger” because Whitehead brings Mary Shelley’s creation into the twenty-first century. Antagonist Dr. Jonathan Masters is a clone of the mad Dr. Frankenstein, while his genetic look-alike mutates into the evil, larger-than-life, out-of-control monster. All this is done by way of genetics and DNA and governmental subsidies, strands unimaginable in the early nineteenth century.

Darwin’s Sword reads like a modern-day thriller, a non-stop rendition of scientific postulations and militaristic confrontations. The single-minded Dr. Masters is the founder of Genetisource, a secret research hub whose employees are pursuing highly classified genomic projects. The novel opens with the discovery of a body. One of the scientists is dead, her mutilated corpse deposited in a basement dumpster. Given Genetisource’s tight security, the murder must be an inside job. Or is it the result of an experiment gone bad? What are her fellow researchers, led by Dr. Masters, hiding?

Jake Storm, retired from the “Agency,” runs Consolidated Specialty Security, Inc., which is responsible for security at Genetisource. His team begins to investigate the situation, but almost immediately a mysterious government team from NSA takes over the scene and whitewashes the crime. When Jake probes further, the plot thickens. More mysterious government bureaucrats and even heavily-armed combatants appear, knots of men more interested in permanently eliminating Jake and his team than in solving the crime. But Jake has his own cadre of ex-Navy SEALS and computer experts, all willing to skirt the law in order to uncover what increasing looks like a wide-spread cover-up.

As the action heats up, the body count increases. At times, in fact, the body count exceeds the page count, so Darwin’s Sword is not for the faint-of-heart. It’s a lively read, however, one that keeps the reader turning the pages faster and faster. It also raises more questions than it answers. I found myself puzzling over some of the unsolved strands of the plot. Masters’ daughter, for example, has been a subject for her father’s research. How and why and to what end is not exactly apparent. The demise of the clone seemed rather far-fetched to me, too, as did the gratuitous ending that tied all the pieces together a little too neatly.

Yet I’m recommending Whitehead’s novel because I thoroughly enjoyed reading it. The characters are well-drawn; the action is fast-paced; the key settings (Seattle and Bellevue, Las Vegas and Mount Charleston) are dear to my heart. I wish Whitehead had been a bit more careful with his narrative details, but that quibble doesn’t make this thriller less thrilling. I might even take back my question about the title. Darwin’s Sword, of course, is an allusion to evolutionary haste, hoist on its own petard, and that fits this novel every bit as well as “Frankenstein’s Doppelganger.”   – Ann Ronald 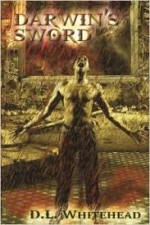 Ann Ronald is a retired English professor from the University of Nevada, Reno. Author of dozens of reviews, she’s also written a number of books about the American West. They include literary studies such as The New West of Edward Abby and Reader of the Purple Sage, cultural studies such as GhostWest and Oh, Give Me a Home, and nature writing such as Earthtones: A Nevada Album. Her latest is a work of fiction, Friendly Fallout 1953. Since retiring, she’s been reading vociferously, so “Bookin’ With Sunny” is giving her a wonderful opportunity to share thoughts about her favorite new discoveries.
More from this reviewer
PrevHow the Scots Invented the Modern World
Night WatchNext