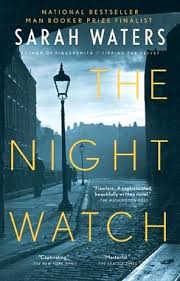 Night Watch presents an intricate literary puzzle, where multiple characters and their lives interlock together, creating an unexpected back-lit photograph of London in the 1940s. The author, Sarah Waters, puts this novel together in a very unusual way, metaphorically right to left instead of a more conventional left to right design. That is, Night Watch begins in 1947, contains a lengthy 1944 section, and ends with a brief narrative of 1941. Period. Night Watch neither returns to 1947 nor explains any transitions between the three chosen years. Instead, Waters is content to let her readers piece together and/or imagine any missing details.

For example, Duncan Pearce works on a nightlight assembly line in 1947, and cares for an aging man he calls Uncle Horace. The reader soon learns that Duncan was in prison during the war, but none of the circumstances of his imprisonment are revealed. In 1944 we find Duncan actually in prison, and we share his confinement. We learn, too, that his crime had something to do with someone named Alec, who is no longer alive. We do not, however, learn exactly why Duncan was incarcerated, nor do we learn anything specific about Alec. Only in the 1941 section of Night Watch is the crime revealed in a single scene that left me, at least, with more questions than answers. Now, a few days later, I am still puzzling about Duncan’s and Alex’s narrative arcs.

The same is true for the other Night Watch characters. Duncan’s sister Vivien has secrets, too. Her enigmatic life involves a long-term affair with a married man, an affair which may or may not be winding down in 1947. Who knows? Perhaps 1944 or 1941 will reveal how the affair began, but one can only wonder how or if it will end. A good idea, perhaps, to keep a reader involved, puzzling how the pieces fit together. Another set of characters centers on Kay, Helen, and Julie, three women emotionally and physically attracted to each other. Helen’s story transitions backwards from post-World War II London to the initial wartime blitzes, which of course is backwards from how one normally encounters a narrative line. Like the reader’s understanding of the Pearce siblings, Helen’s ultimate destiny remains a mystery. We only learn the underpinnings of her present situation.

In many ways, reading Night Watch is an unsettling experience. Normally, we expect the past to inform the present. We are accustomed to a narrative design that propels characters forward in time, just as human lives transition from one year to the next. Because this disconcerting novel operates quite differently, it’s disturbing to read, but in a good way, because it makes a reader think and it makes a reader reconsider the way one normally anticipates narrative progress. I’m still mulling over the interconnected stories of Night Watch, still rewriting the narratives in my imagination. Thus, I recommend Water’s novel to other readers as well. It’s well-worth puzzling over. Besides, Waters is a gifted writer. Her descriptions of war-torn London at night, plus the first-hand experiences of innocent civilians caught in the grip of air raids, fire bombs, and neighborhood destruction, are quite extraordinary. Night Watch, a Man Booker Prize finalist, deserves the accolades it already has received. – Ann Ronald

Ann Ronald is a retired English professor from the University of Nevada, Reno. Author of dozens of reviews, she’s also written a number of books about the American West. They include literary studies such as The New West of Edward Abby and Reader of the Purple Sage, cultural studies such as GhostWest and Oh, Give Me a Home, and nature writing such as Earthtones: A Nevada Album. Her latest is a work of fiction, Friendly Fallout 1953. Since retiring, she’s been reading vociferously, so “Bookin’ With Sunny” is giving her a wonderful opportunity to share thoughts about her favorite new discoveries.
More from this reviewer
PrevDarwin’s Sword
Nevada E M SNext