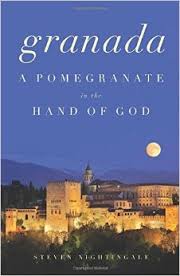 Granada: A Pomegranate in the Hand of God

BUYER BEWARE: I have known Steven Nightingale for several decades and have read his books of sonnets and his two novels. I am an admirer of him, his writing, and Granada. Steven has a heap of passions: the Great Basin, the Sierra Nevada, poetry, ideas, conversations, his wife, his daughter, Granada, Andalusia, and the history of Spain. He doesn’t have space in this memoir-history-manifesto for all of his passions to be expressed, but he manages to include many of them. This book is often too hot to handle; it might spontaneously combust.

The premise of Granada is clear: he, his wife Lucy, and their toddler daughter Gabriella decide to live in Spain for an undetermined amount of time. On a scouting trip to southern Spain, they conclude in an instant that they will live in the medieval part of Granada, the Albayzin, reposed on a slope above the Darro River looking towards the Alhambra in the foreground and the Spanish Sierra Nevada in the distance. It’s a perpetually stunning vista. Some months later, they returned to live in Granada while remodeling a white stucco former convent with walled garden in the Albayzin. Quickly they became immersed in this place: its people, customs, culture, literature, philosophy, religions, and history. For the reader, what initially appears to be a travel memoir and love song to Granada expands dizzyingly into a multi-faceted exploration of the larger context of Al-Andalus (medieval Moslem Spain) of which Granada is a part.

Granada is structured as a lament for a destroyed civilization and an opportunity squandered, but this lyrically written book has a hopeful ending softening the author’s otherwise passionate sorrow and regret. For nearly eight centuries Granada and Al-Andalus gave us immortal contributions in art, architecture, philosophy, music, poetry, mysticism, math, science and medicine. During this long period the three religions “of the Book”—Jews, Christians, and Muslims—co-habited memorably but imperfectly, with sometimes malignant episodes, but with extraordinary cultural productivity. Then, about 1492 (an emblematic date), King Ferdinand and Queen Isabella unleashed the Reconquista and the Inquisition, precipitating nearly 500 years of calamity in nearly every dimension—culturally, religiously, economically, politically, and intellectually. Spain missed out on both the Scientific and Industrial Revolutions as it slid downhill from its pinnacle into a feckless abyss. It achieved a dismal inertia marked by the repressive, fascist dictatorship of Francisco Franco. It only has been since 1975 that Spain has begun to reclaim its pre-1492 glories and only since the mid-1990’s has Granada, the Albayzin, and the Alhambra come to be valued as preeminent cultural wonders.

As interesting as is the historical intersection of Judaism, Christianity, and Islam (convivencia) in Medieval Spain, the charm of Nightingale’s Granada is the immense zest he brings to describing his and his family’s lives in Granada. This is not to diminish at all the immense amount of reading and research that went into the historical sections of this book. Nevertheless, it is clear that Granada connected with Nightingale’s personal taproot in some direct and transformative ways.

He begins Granada with an extended riff on the sensuous pomegranate and its manifold associations, past and present. (I will never think about pomegranates in quite the same way again.) Then he bridges into an equally romantic evocation of the domestic garden, carmen, found within the walled houses in the Albayzin. We learn that these carmenes are not meant to keep people out. Rather they are for “concentrating beauty” and promoting conversation.Then he breaks the bonds of centrifugal force and flies off into a long, poetic exegesis on the associations of gardens with antediluvian Mesopotamia, paradises, the Garden of Eden (“a sour narrative”) and the Greeks’ life-affirming Garden of the Hesperides. Nightingale applies similar methods to a delicious stew of other related topics. While he sometimes overwhelmed me, more often I was entertained and enchanted by the resulting ambrosia. – Neal Ferguson

Also available by Steven Nightingale: The Wings of What you Say; The Golden Pilgrimage; The Light in Them is Permanent; The Cinnamon Theologies; The Planetary Tambourine; Cartwheels; The Thirteenth Daughter of the Moon; The Lost Coast. 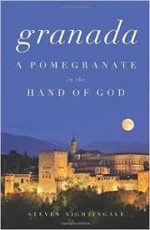 Neal Ferguson is a self described Anglo-phile. After studying for a PhD in British history and doing research for a year in various British archives, he came to the University of Nevada in 1970 to teach. Soon he found himself in administration where he remained until 2003. After returning to full-time teaching a decade ago, he decided to concentrate his teaching energies on Medieval British history and various global aspects of World War II. Dedicated to Ambrose Bierce’s proclamation that the purpose of war is to teach Americans geography, Neal insists that his students accompany him (in class) to sundry east European rivers and steppes, African deserts and jungles, south-east Asian mountain ranges and peninsulas, and small islands and coral reefs in the Pacific. Currently he is writing a book about the ups and downs of General Douglas MacArthur’s military reputation.
More from this reviewer
PrevThe Truth According to Us
The Children ActNext