Home » Reviews » Fiction » The Truth According to Us

The Truth According to Us 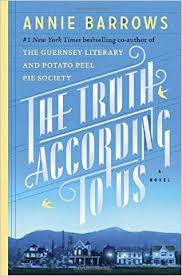 Co-author with Mary Ann Shaffer of the best-selling The Guernsey Literary and Potato Peel Pie Society and creator of a highly regarded children’s series starring Ivy and Bean, Annie Barrows now has written a stand-alone novel all her own. Set in 1938, The Truth According to Us takes place in West Virginia, where a young woman has been sent by the WPA (Works Progress Administration) to write the history of small-town Macedonia. Conflicting agendas factor into her project. How Layla Beck negotiates the difficult terrain turns into a delightful, witty, absolutely charming novel.

Layla decides “to try to make The History of Macedonia something good, something worth reading and keeping.” She notes, “I’ve been thinking about history a good deal in the past few weeks, and I believe it fails when it offers only a tepid recitation of events and dates. A successful history is one that captures the living heat of opinion and imagination and ancient grudge.” So Layla’s task is to discover, to “capture,” the historic underpinnings of a community where everyone’s version of the truth differs slightly from everyone else’s, where many people would prefer to bury the truth of what really happened when, and where ancient grudges still dominate present-day relationships.

Barrows tells Macedonia’s history from many different points of view. While doing her research, Layla boards with the Romeyn family. Despite the fact that the family patriarch managed the town’s major industry for thirty-seven years, his descendants are not on the approved list of notable citizens. Layla wonders why, as does the scion’s precocious granddaughter, twelve-year-old Willa Romeyn. Parallel to Layla’s research and reconstructions of the past, Willa conducts her own investigation.The result is a hilarious layering of stories, myths, half-truths and remembrances.Through interviews, library research, and intuition, Layla garners multiple versions of various events, blends them together, and then writes her own renditions. Willa imagines her own truths, too. Thus every major occurrence in Macedonia’s past is retold numerous times and in numerous ways in The Truth According to Us.

I found myself chuckling on nearly every page, and sometimes actually laughing aloud. The novel is that funny! Beginning with the founding father, General Magnus Hamilton, who must have been certifiably mad but whose reputation must be upheld by his sycophantic heirs, and continuing through the economic ebb and flow of the American Everlasting Hosiery Company, the central business that employs so many Macedonians, Layla reconstructs a surprisingly astute History that horrifies the community elders but totally charms the rest of the citizenry. She also, to the dismay of some and to the delight of others, solves a long-buried mystery.

An astute reader will find many of the truths in The Truth According to Us to be obvious. Most readers will, I suspect, have solved the mystery long before Layla and Willa put all the pieces together. But Barrows’s handling of those ancient truths is surprising; the denouement of the novel differs remarkably from what I had imagined. The “living heat of opinion” not only forges a new Macedonian present-day reality, but directs both Layla and Willa into unexpected futures. I loved The Guernsey Literary and Potato Peel Pie Society; I loved The Truth According to Us, too. – Ann Ronald 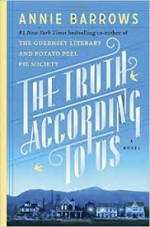 Ann Ronald is a retired English professor from the University of Nevada, Reno. Author of dozens of reviews, she’s also written a number of books about the American West. They include literary studies such as The New West of Edward Abby and Reader of the Purple Sage, cultural studies such as GhostWest and Oh, Give Me a Home, and nature writing such as Earthtones: A Nevada Album. Her latest is a work of fiction, Friendly Fallout 1953. Since retiring, she’s been reading vociferously, so “Bookin’ With Sunny” is giving her a wonderful opportunity to share thoughts about her favorite new discoveries.
More from this reviewer
PrevLudie’s Life
GranadaNext