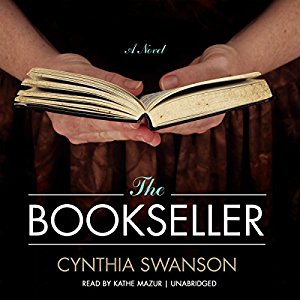 Ordinarily, I distrust a narrative strategy such as the one Cynthia Swanson employs for her novel, The Bookseller. The protagonist, co-owner of a small independent bookstore in Denver, dreams of an alternative reality, a life that parallels her own. The plot drifts between her two selves. One, Kitty Miller, is a thirty-something “career woman” who has chosen to stay single and remain somewhat aloof from personal relationships. Frieda, the other co-owner of Sisters’, plus Kitty’s parents who are on an extended Hawaiian vacation, are Kitty’s only close connections.

Kitty’s dreams, however, present a different self, the anything-but-isolated life led by Katharyn (Kitty’s legal name). Katharyn Miller Andersson is married to Lars, and the two are parents of triplets, a lively trio of youngsters who consume Katharyn’s time. Kitty’s dreams of Katharyn are troubling in that she (whoever she is) cannot remember people, places, or crucial incidents. Instead, she must piece together information that should easily be recalled. For example, she doesn’t know her way around her own house. And she doesn’t realize, at first, that she has three children, not two.

The Bookseller moves seamlessly back and forth between the two existences, alternating encounters and experiences. Soon Kitty/Katharyn begin exploring central sites and personal relationships in each other’s Denver. Let me list a couple of instances without giving away too much of the plot. Kitty’s storefront bookstore no longer exists in Katharyn’s world, it sits empty; Katharyn’s suburban home is only a vacant lot in Kitty’s though the nearby neighbors are the same. Linnea, Lars’ sister, does Katharyn’s hair, and soon does Kitty’s, too. Frieda exists in both worlds as well, but in vastly different roles that stem from the same root. Indeed, Katharyn’s whole existence has evolved from Kitty’s younger ego/id.

As I indicated at the outset, I am not a fan of parallel universes and I am suspicious of authors who fool their readers with the occult. But The Bookseller almost makes me a believer, not of the occult per se but of the way such equivalent existences can raise important questions about how women choose to lead their lives. In essence, The Bookseller is more about real-life female options and less about fanciful alternative universes. The reader might ask herself the same questions Kitty/Katharyn raise. What if I had chosen a different path? Marriage instead of a career? Who might I be? And would I be happier? Or not?

Such psychological and philosophical musings are to me the most interesting elements about The Bookseller. Yet I must admit my appreciation for the way Swanson deftly handles Kitty/Katharyn’s increasing frustrations with her two beings. I didn’t see the denouement coming, yet the resolution was smart and well-conceived. What might have been handled as mental contortions instead became logical inevitabilities. Even I was persuaded. I conclude, then, that I’m glad I read The Bookseller, and that I can readily recommend it to others, especially to women readers who might themselves be pondering choices and different paths.  – Ann Ronald 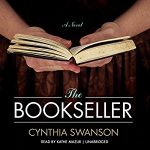 Ann Ronald is a retired English professor from the University of Nevada, Reno. Author of dozens of reviews, she’s also written a number of books about the American West. They include literary studies such as The New West of Edward Abby and Reader of the Purple Sage, cultural studies such as GhostWest and Oh, Give Me a Home, and nature writing such as Earthtones: A Nevada Album. Her latest is a work of fiction, Friendly Fallout 1953. Since retiring, she’s been reading vociferously, so “Bookin’ With Sunny” is giving her a wonderful opportunity to share thoughts about her favorite new discoveries.
More from this reviewer
PrevGrant
Coyote America: A Natural & Supernatural HistoryNext