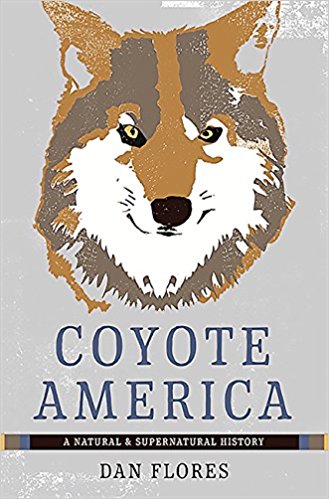 Although Coyote America is about the common American coyote, the title suggests, and its content delivers, a complex view of Canis latrans’ relationship to American geography, history, and culture. To author Dan Flores, its mournful howl is our original National Anthem. Some readers may remain unpersuaded by Flores’s perspectives, but they can’t fail to be challenged and entertained.

Although a city kid, coyotes have been a sporadic but unforgettable part of my life. My first recollection of the useless varmint was on a Sunday morning while driving down a country road towards Udall, Kansas, population 218 to visit my grandmother. Suddenly, my Dad stopped the car and moved quickly to the trunk to unlimber his old .22 caliber rifle. He had spotted a coyote loping across the road a few yards in front of us. Before Dad could set his sights on the animal, the coyote had turned her head towards us, grinned once, dropped her tail, and then disappeared into a nearby cornfield. Not too long afterward, in the early 1950’s, I began watching Wile E. Coyote at the movie cartoons and then on TV, undoubtedly the most famous individual of his species ever. And last summer, I was planting some flowers in our backyard in the middle of Reno, Nevada. I looked up and saw, to my astonishment, a juvenile albino coyote in the yard next door. I have seen dozens of coyotes in Reno in various places, not to mention assorted skunks and raccoons, but the albino was a first. By the time I returned with my camera, he had gone. Damn! It turns out that my experiences are perhaps more typical than I had always supposed.

If Dan Flores read the above paragraph, he might respond: “Well, that’s the point. The American coyote is ubiquitous. It’s a part of our wilderness, our farms and ranches, and our cities. It’s been an integral part of American life from before Columbus. Coyotes are like homo sapiens, infinitely adaptable, but with four legs.” My response: “Maybe, but who knew until you told us?” He would undoubtedly object to my characterization of Canis latrans as a useless varmint but would also understand the origins of my prejudice. See Mark Twain’s Roughing It for a seminal description of the coyote’s worst attributes.

Flores’ biography of the coyote in Coyote America is astonishingly well done. Between its covers, is presented a kaleidoscopic view of the American coyote. We get its biology, genetics, ecology, history, spirituality, and cultural relevance, all told with clarity, insight, humor, and graceful prose.

Dan Flores is a coyote enthusiast. He admires the coyote for any number of reasons, but one stands out. The coyote is an intelligent, adaptable animal that has found ways to cope, survive, and even thrive in the face of the resolute determination of many state and US agencies to fight a “Hundred Years’ War” to eradicate “the arch predator of our time.” In contrast, the American Indians have long revered the Coyote (the divine avatar of all coyotes) for its powers and its complete array of human characteristics, from benign to devilish prankster. Flores summarizes the coyote’s powers by dubbing it the Dude, “and the Dude abides.”

Coyote America is one of those books that I was sad to finish. I wanted Flores to tell me more about the American coyote. Fortunately, he anticipated my reaction and provided enough further reading about this “mid-sized predator” to keep me turning pages for a while. He has even helped me mitigate the remaining prejudices I have retained against this amazing creature.   – Neal Ferguson 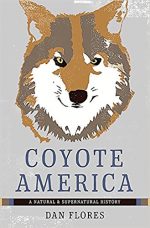 Neal Ferguson is a self described Anglo-phile. After studying for a PhD in British history and doing research for a year in various British archives, he came to the University of Nevada in 1970 to teach. Soon he found himself in administration where he remained until 2003. After returning to full-time teaching a decade ago, he decided to concentrate his teaching energies on Medieval British history and various global aspects of World War II. Dedicated to Ambrose Bierce’s proclamation that the purpose of war is to teach Americans geography, Neal insists that his students accompany him (in class) to sundry east European rivers and steppes, African deserts and jungles, south-east Asian mountain ranges and peninsulas, and small islands and coral reefs in the Pacific. Currently he is writing a book about the ups and downs of General Douglas MacArthur’s military reputation.
More from this reviewer
PrevThe Bookseller
On Love, A NovelNext