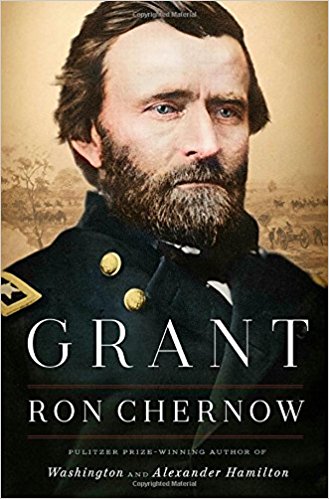 After reading Ron Chernow’s Alexander Hamilton, I had some trepidation about opening his newest book, Grant. I didn’t think he could surpass Hamilton (see my review for BWS) either in quality or length. Also, being a Civil War junky, I’ve read a half-dozen biographies of Grant over the past thirty years and even feasted on his massive but entertaining and elegantly written two-volume Personal Memoirs of Ulysses S. Grant. What more could I learn? With reluctance, I put aside my hesitations. Wow! It’s even longer than Hamilton! It’s every bit as well researched and readable. Chernow’s prose is clear and direct. More importantly, I learned some things about Grant that surprised me. The acclaim Chernow has received for Grant is well deserved.

Given the inclinations of authors and publishers these days to tack on sub-titles to their books for purposes that often mystify and aggravate me, I think it remarkable that Chernow’s title is simply Grant. The title is, like its central character, unadorned. Intentional or not the choice of Grant for the title is a bit of play on words. Think of Grant and granite. Chernow’s characterization of Grant is lithic but not monolithic. Like the stone granite, Grant, the man is in many ways, not without his flaws, some easily identifiable, others set deep in bedrock.

Grant’s most notorious flaw was his attraction to alcohol. In 1854, at the age of thirty-two, alcohol appeared to have cost him a promising career in the Army. (His subsequent civilian endeavors were even less successful.) The need for liquor was a goad throughout his adult life. Liquor’s impact on his effectiveness first as a soldier, then as a civilian, and finally as a general officer, and Commander-in-Chief continues to be a much-discussed topic. His legions of detractors—Confederate, political, and military—have used evidence of his episodic drunkenness with an often-devastating impact on his reputation, while his defenders have frequently appeared to be overly defensive, tone-deaf, and even in denial. Early on, President Lincoln had his doubts about Grant’s military effectiveness but overcame them by focusing on the results that Grant produced. A great strength of Chernow’s biography derives in part from following Lincoln’s example. Chernow never lets the reader forget Grant’s sobriety challenge. At every stage of his life where demon rum might have made Grant incompetent, Chernow carefully and even-handedly sorts through the evidence and clearly states his conclusions. I must admit that Grant’s reputation as a drunkard had affected my assessment of the man and his accomplishments; Chernow has helped me soften my formerly critical assessment. He has helped me develop a fuller perspective, one based on evidence rather than “fake news,” a common feature of Civil War reportage.

Another topic that Chernow elaborates on in great depth and breadth is Grant’s love for the Union cause, and how, over time, his dedication to maintaining the Union had repercussions beyond his military goals. In particular, Chernow convincingly shows that Grant evolved into a staunch partisan of former slaves and their uphill battle for civil rights following the end of the Civil War. Chernow’s discussion of why Grant ultimately failed to prevent the re-establishment of white supremacy and the institutionalization of Jim Crow in the former Confederate states (and elsewhere in the US) is both fascinating and unsettling.

This biography is long, but so was Grant’s list of challenges and accomplishments. He was not always successful, but he was an interesting, changing, important general and President at a critical time in our history. Chernow’s biography is a commendable effort to portray a mostly commendable man.   – Neal Ferguson

Also available by Ron Chernow: Alexander Hamilton; The House of Morgan; Washington, A Life; The Warburgs; The death of the Banker, the Decline and Fall of the Great Financial Dynasties and the Triumph of the Small Investor; Titan, the Life of John D. Rockefeller, Sr. 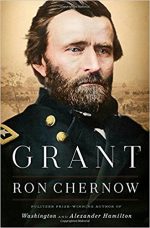 Neal Ferguson is a self described Anglo-phile. After studying for a PhD in British history and doing research for a year in various British archives, he came to the University of Nevada in 1970 to teach. Soon he found himself in administration where he remained until 2003. After returning to full-time teaching a decade ago, he decided to concentrate his teaching energies on Medieval British history and various global aspects of World War II. Dedicated to Ambrose Bierce’s proclamation that the purpose of war is to teach Americans geography, Neal insists that his students accompany him (in class) to sundry east European rivers and steppes, African deserts and jungles, south-east Asian mountain ranges and peninsulas, and small islands and coral reefs in the Pacific. Currently he is writing a book about the ups and downs of General Douglas MacArthur’s military reputation.
More from this reviewer
PrevOld Boys
The BooksellerNext