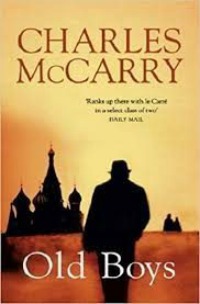 For those of us who relish old-fashioned, sophisticated spy stories in the Ian Fleming or John LeCarre mode, Charles McCarry’s novels are always a treat. Old Boys, the latest (and final?) in his Paul Christopher series, displays all of McCarry’s cerebral talent. As his narrator comments midway through the book, none of the old boys like guns. “In our day gunfire was regarded as the sound of inexcusable failure. The mission back then was to tiptoe in and out, leaving no one the wiser. The adversary (never rudely called the enemy) wasn’t supposed to find out what you’d done to him until it was too late, if ever.”

Rather than the unbelievable shoot-outs and incredible super-bionic deeds of today’s spy thrillers, McCarry’s heroes use their brains. They scheme, they plan their moves like chessboard masters, they use finesse to outwit their foes. They also drink Laphroaig single malt, dine on filet mignon, listen to classical musical, and drop literary allusions with perceptive frequency. McCarry wants his readers to use their heads, not suffer from heart-pounding alarm.

The premise of Old Boys, as well as the tone, harkens to the past. A number of men who once worked for “the company” have long since retired. One, Paul Christopher, the shrewdest and perhaps most capable of all, now has gone missing. His cousin, an ex-CIA man too, doesn’t believe for a minute that his boyhood friend and long-time colleague is dead. Even though the Chinese government has sent an urn supposedly containing Paul’s ashes, Horace is convinced that Paul is still alive. To prove it, he invites an over-the-hill gang of elderly ex-spies to undertake one last caper, to figure out what exactly happened to Paul. Gathering information using current electronic means, even as they use old contacts and time-tested methodology, the merry crew invades the milieu that retirement left behind.

The plot is serious, taking the narrator and his old boys around the world, from South America to Moscow to the Himalayas, into back alleys and Parisian cafes and Arabian tents. Their adversaries are multiple, their rationales complex. Past cases resurface, while new present-day opponents also enter the fray. Occasional gunfire does occur, especially toward the end of the novel, but mostly these old spymasters think their way out of touchy situations. Their machinations are done with humor, too. In many ways, Old Boys is uproariously funny. McCarry well recognizes the absurdity of their task yet sends them into wonderfully precarious situations and then extricates them imaginatively.

Maybe this a book better read by someone of the old boys’ generation? Someone who grew up with Fleming and LeCarre, not Vince Flynn or Brad Thor? Someone not quite as physically adroit as he (or she) was in his (or her) prime? Someone with an agile mind, however, someone who delights in sticky situations and urbane solutions. Do you remember T.S. Eliot’s paean to the elderly, “The Love Song of J. Alfred Prufrock?”

I shall wear the bottoms of my trousers rolled.

Shall I part my hair behind? Do I dare to eat a peach?”

That’s how Old Boys ends, with the aging narrator suffering retirement once again. “Sometimes,” he admits, “I dared to eat a peach.” A peach of a novel for us old-timers, Old Boys! – Ann Ronald 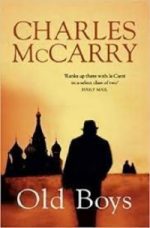 Ann Ronald is a retired English professor from the University of Nevada, Reno. Author of dozens of reviews, she’s also written a number of books about the American West. They include literary studies such as The New West of Edward Abby and Reader of the Purple Sage, cultural studies such as GhostWest and Oh, Give Me a Home, and nature writing such as Earthtones: A Nevada Album. Her latest is a work of fiction, Friendly Fallout 1953. Since retiring, she’s been reading vociferously, so “Bookin’ With Sunny” is giving her a wonderful opportunity to share thoughts about her favorite new discoveries.
More from this reviewer
PrevThe Woman in the Window
GrantNext