The Book of Jonas 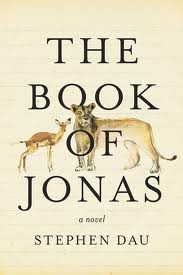 Stephen Dau has written a most enigmatic and satisfying novel that delivers a story of loss as publicly broad as it is personally intimate. The Book of Jonas paints a haunting picture of the devastation wrought by the relentless war on terrorism. It is the story of an American soldier, Christopher, a young Muslim boy, Younis, and Christopher’s mother, Rose.

Younis lives in a village located in an unidentified Muslim country. Christopher is a young U.S. Marine whose platoon has gathered near this village. Intentionally or mistakenly, the village is attacked and obliterated by the Marines. Younis is wounded and his family is killed, as are most of the villagers. Dau’s subject is not only war itself, but all it’s accompanied losses. We feel Younis’ loss of family and place, Christopher’s loss of honor and integrity for his part in the attack, and Rose, the mother who struggles to make sense of her son’s death with only photographs to grieve over.

Fleeing his destroyed village, Younis hides in a cave in the nearby mountains. He is not alone. In the same mountain cave is a young disillusioned Marine, fleeing the same scene. Younis, barely alive, is cared for by Christopher until the boy can leave the cave and reach a Quaker relief organization. From there he is flown to the U.S. where he is treated for his injuries and placed with an American family to begin a new life. Christopher cannot be saved and when news of his death reaches his mother  in Philadelphia, the military has no explanation as to how or exactly where he died. Rose, too, must find her way out of a different sort of cave.

The Book of Jonas draws upon Biblical tradition and the comfort of religious ritual. It is divided not into the three stories of its three central characters, but into Processional, Invocation, Remembrance, Communion, Confession, Atonement, Benediction and finally Recessional. In an echo of “In the beginning was the Word,” Stephen Dau begins with the Processional and the many words of the villagers as they ponder the meaning of planes flying overhead. Within The Book of Jonas is a second book, a diary of sorts; a gift given to Christopher by his mother before he enlists and in which he writes his thoughts as he tries to make sense of the actions taken by himself and his fellow Marines. It also holds the key to the circumstances of his death.

The moving power of The Book of Jonas (a mere 256 pages) is the author’s ability to never lose the thread woven between Jonas (Younis’ American name), Christopher, and Rose. Their stories move backward and forward, but never distant from one another. One character’s loss never dominates the other’s, instead these losses serve to illuminate and enlighten. Each section of the book is divided into brief chapters, often no longer than a paragraph, all with a brevity of style and language that moves the narrative to its fateful, solemn and ultimately hopeful end.

The Book of Jonas is a gem and startling in its brilliance. This unflinchingly honest and even-handed telling of the devastation of war will not easily be forgotten. I look forward to whatever Dau writes next.        -s.s.

Sunny Solomon holds an MA in English/Creative Writing, San Francisco State University. She is a book reviewer for “The Clayton Pioneer” and her poetry and other writing has been published in literary journals, one chapbook, In the Company of Hope and the collection, Six Poets Sixty-six Poems. She was the happy manager of Bonanza Books, Clayton, CA and Clayton Books, Clayton, CA. She continues to moderate a thriving book club that survived the closure of the store from which it began. Sunny currently lives next to the Truckee in Reno, NV.
More from this reviewer
PrevDefending Jacob
Good Fortune in a Wrapping ClothNext