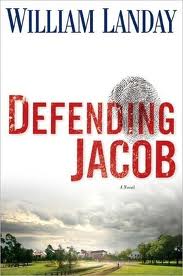 Last evening I was talking with two poet friends about the term ‘niche writer.’ We agreed that formula prose is a lesser sort of creation, like a pulp western or a Harlequin romance. Niche is nicer, describing a Viet Nam poet, perhaps, or a novelist who writes about the eighteenth century, someone who has found not only a comfort zone but ways to stretch that comfort zone in ever new and compelling directions. As our conversation got more and more literary insider, pointing fingers and naming names, I realized I currently was reading the very best sort of niche prose. Like similar novels by Scott Turow and John Lescroat, William Landay’s Defending Jacob is a perfect example of legal thriller, complete with arresting characters and totally unexpected twists and turns.

The narrator, an assistant district attorney in Newton, Massachusetts, finds his world turned upside down when his fourteen-year-old son is accused of murdering a classmate. Another assistant district attorney, hoping to further his own career at the expense of his colleague, pursues the case zealously. When a grand jury brings an indictment against the boy, his father is suspended from the D.A.’s office and the once-tightly-knit family begins dramatically to unravel. The novel closely follows this disintegration, then moves to the intricacies of a trial by jury. Like any effective legal thriller, the courtroom scenes of Defending Jacob display, step-by-step, the long drawn out interplay between the prosecution, the defense, the judge, the witnesses, the jury, the families involved.

William Landay, himself a former district attorney, knows the territory well. He builds the growing tension by using a staccato prose that captures the rapid-fire strategies of both sides, the D.A.’s and defendant’s. Increasingly, that staccato effect gets inside the reader’s blood. I found myself totally captured by the exchanges, yanked in multiple directions by one witness and another, by a sudden tactic, by a blunt objection, by a judge’s response. In the best legal thriller fashion, the author tantalizes the reader. Is the boy innocent? Is he guilty? Will we ever know for sure? And what, and why, will the jury decide?

If that’s not enough tension, there’s Part IV of the novel, which hammers all the pieces of the book apart again. Questions resurface, answers seem insufficient. Interspersed throughout the book has been the testimony from a later grand jury. In those snippets, printed out as if part of a legal transcript, the narrator himself is being questioned intently by his nemesis ex-colleague. Only in the climactic Part IV does the reader finally learn the reasons for this subsequent indictment.

No! It’s not what you think! You can’t begin to guess the ending! Landay totally surprises everyone, characters and readers alike. And that’s what makes Defending Jacob such a stunning example of a legal thriller, a wickedly successful example of niche writing that keeps you turning pages well into the dark of the night.            -A.R.

Ann Ronald is a retired English professor from the University of Nevada, Reno. Author of dozens of reviews, she’s also written a number of books about the American West. They include literary studies such as The New West of Edward Abby and Reader of the Purple Sage, cultural studies such as GhostWest and Oh, Give Me a Home, and nature writing such as Earthtones: A Nevada Album. Her latest is a work of fiction, Friendly Fallout 1953. Since retiring, she’s been reading vociferously, so “Bookin’ With Sunny” is giving her a wonderful opportunity to share thoughts about her favorite new discoveries.
More from this reviewer
PrevThe Wake of Forgiveness
The Book of JonasNext