The Wake of Forgiveness 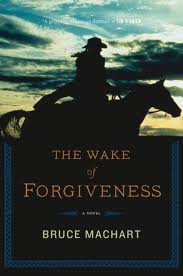 Czech family tensions in rural America. Brothers and bad blood. Pulsing, metaphoric prose. Violent Texas machismo. Generations of distrust and hate. Stirred together, this is the recipe for Bruce Machart’s The Wake of Forgiveness. Alternating between 1895, 1910, and 1924, the story of Karel Skala unfolds abruptly, in confrontational events that explode onto the pages of this book. Born at the moment of his mother’s death, Karel, along with his three brothers, is raised by an unforgiving father. Vaclav Skala uses the boys like plow horses, driving them in their traces and lashing them with his whip. When Karel is fifteen years old, the fragile filial relationships explode in a melee of horse racing, psychological predation, and destructive fury. The fracture then elongates and widens as the story unfolds.

All this mayhem takes place in a poetically constructed world, “where the sky hangs swollen and sickly above the distant horizon as if the whole mass of the heavens has been wounded and gauzed with clouds and backlit feebly by the diminishing moon.” Like his noteworthy predecessors, Machart creates a fictional milieu that is a tangible element of the bloody soil it inhabits. He also creates characters whose attitudes and actions alternate between blind instinct and thoughtful finesse. “His eye is puffed up near to closed, aching still, but only as a muted throbbing deep beneath the skin. There’s something to be taken from this, he thinks. Something about the body, something about the eyes, about the flesh and the bones and the heart. About how they want to adjust, to heal, to see and feel. And they do, he thinks, if never entirely.”

The main plot of The Wake of Forgiveness is both simple and complex. Directly, it brings Karel Skala from birth to manhood. But it weaves back on itself, layering past and present, then repeats itself in other people’s stories. For example, Karel’s suckling nurse later gives birth to twins, and the relationship between those twins, who themselves are responsible for the cataclysmic climax of the novel, mirrors and reflects the relationships between Karel and his own brothers. And Karel’s wrenching from his mother’s womb in a way recurs over and over again as he interacts with the women in his life—his lovers, his daughters, his wife. Crucial, too, is his alliance with his father, a primordial connection that defines and later disgusts the man Karel becomes. Whether or not Karel can pull free from his past is the essence of his story.

When I began the book, I thought I was reading violence for violence’s sake, but as I read further I realized that Machart was constructing a much more subtle dynamic. Along with the destructive behaviors and their dreadful consequences, there appear possibilities of redemption. “It was all the truth of the present, but he had let his awareness of it slouch back into the recesses of his mind the way the guilt stricken, in time, fold their sins into the gray creases of their consciousness, into the musty and neglected shadows of all that is not quite forgotten.” Whether or not Karel can pull free from the recesses of his mind and forget the violence in his soul, whether he can find redemption and hold onto its frail horizons, is what pulls the reader from page to page of this stunning work of fiction.                       -A.R.

Ann Ronald is a retired English professor from the University of Nevada, Reno. Author of dozens of reviews, she’s also written a number of books about the American West. They include literary studies such as The New West of Edward Abby and Reader of the Purple Sage, cultural studies such as GhostWest and Oh, Give Me a Home, and nature writing such as Earthtones: A Nevada Album. Her latest is a work of fiction, Friendly Fallout 1953. Since retiring, she’s been reading vociferously, so “Bookin’ With Sunny” is giving her a wonderful opportunity to share thoughts about her favorite new discoveries.
More from this reviewer
PrevToulouse 4 Death
Defending JacobNext