Good Fortune in a Wrapping Cloth 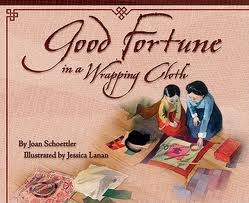 Sometimes it’s best to hold back on a book review until it fits snugly into certain holidays. Good Fortune in a Wrapping Cloth is just the picture book to review and present to you for Mothers’ Day. Of course it is worth reading any day of the year, but Joan Schoettler, a native Californian, has written a most unusual story about a mother and daughter and the threads that bind their love.

Ji-su is a young Korean girl whose father has been lost at sea and whose mother is a most talented seamstress. Good Fortune is the story of what happens to Ji-su when her mother’s fine stitchery is brought to the attention of the king. This is not modern Korea, but Korea of the 1700s, when a king’s word could separate a mother from her daughter. After seeing wrapping cloth sewn by Ji-su’s mother in a market place, the King called for her to become part of the royal household where she would sew only for him. Such a command was considered an honor for Ji-su’s family, but for Ji-su it meant only the heartbreaking loss of her beloved Eomma (UHM-ma): mother.

The wrapping cloth is called bojagi (BOH-jah-ghee). It is a square, hemmed piece of material made of carefully chosen pieces of various fabrics, then decorated with great care. Such a cloth has many uses in Korean culture, from wrapping fruit, to covering a table and always with the knowledge that good fortune is to be found beneath the cloth. Before Eomma leaves, she gives Ji-su a gift, a small box wrapped in a bojagi. Inside the box are all the tools and material Ji-su will need to learn how to sew her own bojagi.

Left in the care of her great-aunt, Ji-su slowly learns her mother’s craft. Ji-su’s hope is to become as fine a seamstress as her mother, so that the king’s Sanguiwon (SAHNG-boh), overseer of palace sewing needs, will see her bojagi, recognize its quality and tell the king that she, too, should be called to live in the royal palace. Though such a hope for a young girl to be reunited with her mother is most understandable, it is also most unlikely.

Schoettler’s story is intensified by the fine illustrations of Jessica Lanan. Lanan, who has traveled extensively in Asia, is as flawless in her ability to depict the changing seasons of the year in which the story takes place as Ji-su’s mother is at sewing wrapping cloth. Lanan’s subtle use of colors and sometimes delicate lines speak strongly of the Korean countryside without ever overpowering Schoettler’s narrative. The emotional impact of her illustrations of Ji-su with her mother, with her great-aunt and with the kings emissaries is remarkable.

Can Ji-su, in only one year, learn to sew as well as her mother? This reviewer is not telling, but it is my belief that pictures books are, or can be, a child’s doorway into the world in which they live, especially today. At the back of the book is a wonderful glossary (with phonic spellings) of many Korean words used in the book. It is great fun to see how good you are at pronouncing these words and makes a rereading much more lively. Good Fortune in a Wrapping Cloth is as fine a way as any to introduce a child to geography, to different cultures, and most importantly to feelings. I’ve read the book many times now and almost every time I find something new and that is bok (bohk) good fortune.     -s.s.

Sunny Solomon holds an MA in English/Creative Writing, San Francisco State University. She is a book reviewer for “The Clayton Pioneer” and her poetry and other writing has been published in literary journals, one chapbook, In the Company of Hope and the collection, Six Poets Sixty-six Poems. She was the happy manager of Bonanza Books, Clayton, CA and Clayton Books, Clayton, CA. She continues to moderate a thriving book club that survived the closure of the store from which it began. Sunny currently lives next to the Truckee in Reno, NV.
More from this reviewer
PrevThe Book of Jonas
Mr. gNext