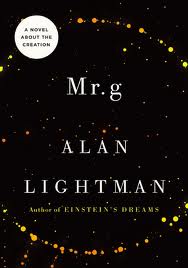 Alan Lightman, author of the celebrated Einstein’s Dreams, has taken his latest fiction, Mr. g, even further, inviting the reader into the imagined realm of creation; from the world of Void, into time, to space and, well, “…if you tried to picture wind or stars or water, you could not give form or texture.” Not until, of course, Creation!

Alan Lightman is a genius at creation himself. The god of creation in Lightman’s novel is young and rather inexperienced, but with the encouragement and loving support from an Aunt and Uncle who, without explanation, also reside in the Void, he is undaunted and sets out with youthful enthusiasm to see what he might accomplish. Lightman imagines not only what Mr. g creates, but all the endless problems that appear to coexist within all that has been created. He does this with such a down-to-earth approach to the step by step process, that the reader has more than a few, “ah, yes” moments as if understanding things that, up to now, had been beyond her ken: “There were ellipsoids and spheroids and topological hyperboloids,” and always the ticks of the atomic clocks.

If you are new to Lightman, first and foremost, is the fact that he is personally an admitted atheist and professionally a theoretical physicist; think mathematics rather than testing and observation as the path to truth. If your atheism is so doctrinaire you cannot abide even the idea of Creator – give it up, this probably isn’t your book. I’m not going near the range of Christians who might like to tar and feather Lightman for his take on a Creation only loosely related to Scripture. For everyone else – all you thinking atheists, agnostics, Christians, Muslims, and Jews, come on in, the water’s fine!

Mr g has been reviewed by many as a modern fable and if you believe as Mary McCarthy did, that when animals speak, the story is indeed a fable, then they may be correct. Certainly there is a speaking animal in the character of the Devil’s ugly and grotesque primordial canine, Baphomet. But that brings us to the other side of a fable which is its moral. If there is a moral in Lightman’s endeavor, it is not easily discerned. The best I could come up with is that to question the existence of a Creator by a careful, if not rudimentary primer on the physics of all that is combustible, can be a creative effort all its own, resulting in a litany of pondering. Even Lightman’s Mr g is almost beside himself with self-doubt, questioning free will, the possible value of evil, and the eventual and, by its nature, the natural end of everything created, a cessation of life without any reasonable expectation of a creator-associated second life. Such a second life is not a suggestion of redemption, which by definition would rely on something lacking in the created, but rather a desire by human life to exist eternally with their Creator. Something that ain’t going to happen according to Mr. g.

Mr. g is a gentle but sweeping effort to help the reader understand, without the minutiae of religious dogma, the inevitable, and possibly regrettable, inherent physical limitations of all life, human and otherwise. Even Mr. g regrets this. Lightman seems to suggest that a lack of eternity might be offset by an appreciation for the complexity and grandeur of life itself and that Mr. g has never abandoned his love and his heartfelt concern for the eventual demise of all that he’s created. Each step of creation’s evolutionary process, upon its completion, has been recognized by Mr. g (and most likely a large number of readers) as good.

Fable? Probably, and all the more wise and satisfying for the questions it raises and for the generosity of Mr. g’s willingness to share his own take on what he hath wrought.  –  Sunny Solomon

Also available by Alan Lightman: Einstein’s Dreams; Searching for Stars on an Island in Main; The Accidental Universe; The Diagnosis; Three Flames; Praise of Wasting Time; Screening Room, Family Pictures; A Sense of the Mysterious; Good Benito; Dance for Two, Selected Essays; Ghost; The Discoveries; Reunion; Song of Two Worlds; Problem Book in Relativity and Gravitation; Probable Impossibilities, Musings on Beginnings and Endings; Great Ideas in Physics; Ancient Light, Our Changing View of the World; Time for the Stars, Astronomy in the 1990s; Time Travel and Papa Joe’s Pipe; A Modern Day Yankee in a Connecticut Court and Other Essays on Science; The Heart of the Horse; Origins; The Lives and Worlds of Modern Cosmologists; The World is Too Much with Me, Finding Private Space in the Wired World; Reprisals

Sunny Solomon holds an MA in English/Creative Writing, San Francisco State University. She is a book reviewer for “The Clayton Pioneer” and her poetry and other writing has been published in literary journals, one chapbook, In the Company of Hope and the collection, Six Poets Sixty-six Poems. She was the happy manager of Bonanza Books, Clayton, CA and Clayton Books, Clayton, CA. She continues to moderate a thriving book club that survived the closure of the store from which it began. Sunny currently lives next to the Truckee in Reno, NV.
More from this reviewer
PrevGood Fortune in a Wrapping Cloth
A Novel BookstoreNext