Home » Reviews » That’s Not a Feeling

That’s Not a Feeling 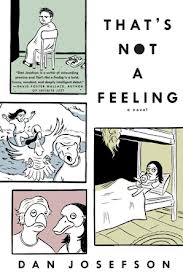 I am tempted to call Dan Josefson’s first novel, That’s Not A Feeling, a fourth generation offspring of Ken Kesey’s One Flew Over the Cuckoo’s Nest. Poignant, funny, fearless, profound, the story begins when the narrator’s parents deposit him at Roaring Orchards, a residential academy for problematic teenagers. Benjamin later explains:

“I’m writing all this down so I can forget about her (Tidbit, a girl confined at Roaring Orchards, too), so I can stop thinking about the school. All I want is to lay something down between myself and the things that happened there, even if it’s nothing but a screen of words. There’s an insect I read about called the Western Spittlebug. Clastoptera juniperina, whose nymphs protect themselves by chewing up juniper stems and spitting out little bubbles until they’ve covered themselves in foam. The foam keeps the bugs from being dried up and burned by the sun. That’s really all I’m doing by writing this.”

In a single paragraph, Josefson’s mastery of metaphor, his intense imagination, and his philosophical propensities come together for the reader. After that, the book just gets better and better.

The characters are weird, to be sure, and their plight is weirder still. They are housed in an old mansion, they spend their days taking classes with names like Cooking With Butter (where they read books like Walden and The Decameron), they work at tasks that tend to involve shoveling (sometimes dirt and sometimes snow, while the author shovels you know what), and the teachers (the keepers) are just as egocentric as the students (the inmates). Benjamin explains their plight:

“Tidbit was like me, I think. Not in most ways, but in this: she had no idea what was wrong with her. Sometimes she felt that whatever it was must be so large and diffuse that she couldn’t get her head around it; other times it seemed it was some tart, nasty thing right at the center of her. Or not quite the center. Just off-center enough that she was always twisted and sweating and stumbling off in the wrong direction.”

Again, Josefson’s words are pitch perfect, for both the characters and their situations.

Tidbit is confined to Roaring Orchard because she bites people; Benjamin has apparently tried to commit suicide more than once; each of their friends is there for a different, aberrant escapade. The parents, who occasionally visit, are as odd as their children. On-campus punishments are peculiar, too. Ghosting is to ignore someone who has misbehaved, while cornering sets someone in the corner of a room for hours or even days on end. When a student runs away, and that often happens, he or she is down-graded from one level to the next. An Alternative Kid can become a New Kid overnight. The list of drugs they are given reads like a pharmaceutical directory. “I don’t know why they keep us on so many meds,” Benjamin muses. ‘We’re not sick, we’re just sad.” Tidbit’s response? “Speak for yourself.”

I don’t normally include so many direct quotes in a review, but That’s Not A Feeling contains so many memorable lines that I want to repeat and remember them. Even the headmaster, who is clearly as unhinged as his charges, has thoughts worth sharing. “I think of the school,” he opines, “as an enormous psychic mending workshop.” If that isn’t an ironic undercutting of the utter mania that pervades this book, try this recollection of Benjamin’s:

“And when I try to recreate that first night I have a strange sense, a feeling that I could not have possibly had then: that despite the terrors of that unfathomable new place, lying in a room with four other kids, hearing them breathing and shifting as they slept, I seem to remember feeling somehow protected.”

This is Dan Josefson’s debut novel and a great read for both adults and young adults.      -s.s.

Ann Ronald is a retired English professor from the University of Nevada, Reno. Author of dozens of reviews, she’s also written a number of books about the American West. They include literary studies such as The New West of Edward Abby and Reader of the Purple Sage, cultural studies such as GhostWest and Oh, Give Me a Home, and nature writing such as Earthtones: A Nevada Album. Her latest is a work of fiction, Friendly Fallout 1953. Since retiring, she’s been reading vociferously, so “Bookin’ With Sunny” is giving her a wonderful opportunity to share thoughts about her favorite new discoveries.
More from this reviewer
PrevMarried at Fourteen
Talk TalkNext