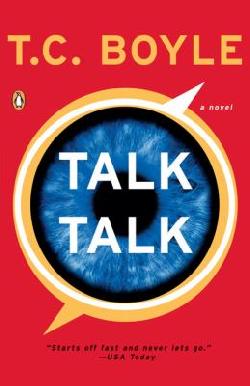 “When deaf get together talk talk all the time. Communication, the universal need. Information. Access. Escape from the prison of silence. Talk, talk, talk.”

The title of T. C. Boyle’s novel, Talk Talk, coincides with its prevailing metaphor. Throughout the book, the deaf heroine both literally and figuratively struggles to make her voice heard. Dana’s story begins when she is arrested and thrown in jail for passing bad checks and for skipping bail in another state. After a weekend in detention, she proves her innocence; finally she’s free. But Dana has been the victim of identity theft, and so she isn’t really free at all. Frustrated by her ugly ordeal, disgusted by all she must do to get back her good name and her exemplary credit rating, angry at being silenced, Dana and her boyfriend, Bridger, vow to track down the culprit—a man, using Dana as his name.

What follows is a wonderfully satiric romp across the country and through the labyrinths of legalese connected with identity theft. Just as the world misunderstands a deaf person’s ways of communicating, so the law misinterprets Dana’s attempts to recover her persona and to bring the new Dana to justice. Every twist and turn of Talk Talk’s plot is accompanied by an analogous miscommunication. When confronted with his crimes, the new Dana convinces himself that he’s the victim. How could this interloper disrupt the comfortable life he has fraudulently built? Self-righteously, the new Dana then becomes the new Bridger, stealing the boyfriend’s identity as easily as he has stolen dozens of other people’s names over the past several years.

Meanwhile, Dana herself is relentlessly trying to make her voice heard. Not only does Talk Talk expose the underside of identity theft—how easy it is to accomplish, how difficult it is to undo the ensuing chaos—but the narration also lays bare the often uncomfortable universe of someone with a disability. Dana’s deafness has nothing whatsoever to do with her ability to function successfully. With a Ph.D. and a career as a teacher, she has already fought through many of the battles facing the hearing impaired. Now she must fight those same battles in a different way, needing to prove once again that she is who she really is, not the Dana others superficially see.

Bridger faces similar blockades. Besides losing his own identity, he must interpret Dana’s explanations and, increasingly, he must relearn how to communicate more clearly with the girl he loves. Their ordeal takes a toll on their relationship, as one misstep leads to another. In addition, Bridger’s own life serves as a second metaphor that drives the book’s convolutions, only it’s an inverted one. Bridger works at Digital Dynasty, where his computer software job is to enhance cartoon film sequences, superimpose actors and actresses onto the screen, and erase all the puppeteer lines. His goal is to make reality become illusion. Conversely, in Talk Talk, Bridger and Dana are forever struggling to turn the new illusion back into the old reality that once was their uneventful lives.

Talk Talk is fun, but it’s also serious, serious about what it conveys about loss of self, loss of identity, loss of words. In their efforts to “escape from the prison of silence,” Dana and Bridger talk their way out of one mishap after another. The new Dana, a.k.a. the new Bridger, is an elusive quarry, his real identity as questionable and as convoluted as can be. To find out what happens in the end—illusion or truth or the two twisted together—you’ll have to read the book. It’s a good one.                – Ann Ronald 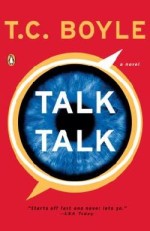 Ann Ronald is a retired English professor from the University of Nevada, Reno. Author of dozens of reviews, she’s also written a number of books about the American West. They include literary studies such as The New West of Edward Abby and Reader of the Purple Sage, cultural studies such as GhostWest and Oh, Give Me a Home, and nature writing such as Earthtones: A Nevada Album. Her latest is a work of fiction, Friendly Fallout 1953. Since retiring, she’s been reading vociferously, so “Bookin’ With Sunny” is giving her a wonderful opportunity to share thoughts about her favorite new discoveries.
More from this reviewer
PrevThat’s Not a Feeling
Cloud AtlasNext