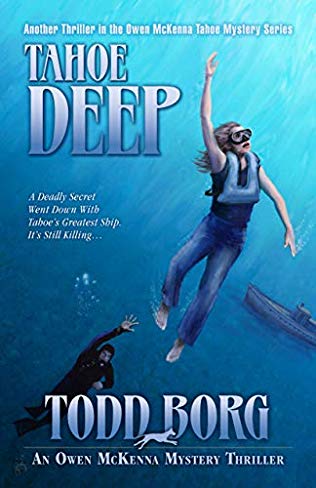 I almost missed Todd Borg’s latest Owen McKenna Tahoe mystery Tahoe Deep before summer’s end, but it is still pretty hot up here in Reno, so grab a copy and head out to the beach or poolside lounge.

As in all Borg’s mysteries, the story begins with a prologue to whet the reader’s appetite, and murder usually occurs by page ten or twelve. Tahoe Deep, however, is different. Oh, there is a murder, but we don’t know the name of the victim or the killer. Even more mysterious, a legally blind teen, with the help of binoculars and a keen sense of hearing, on an August evening in 1940, overhears a young couple on the beach plotting the feasibility of committing murder aboard the nearby, soon-to-be-scuttled, SS Tahoe Steamer. Through his binoculars, the teen watches the couple head out to the steamer by rowboat. The rowboat, sometime later, returns with only the young woman. The boy watches the woman through his binoculars, and by her movements, he recognizes his sister.

Fast forward to present-day South Lake Tahoe. Owen McKenna, ex-SFPD detective turned PI, is called by a woman begging for help. Her legally blind nonagenarian neighbor, Daniel Callahan, has been brutally beaten in what appears to be a home invasion, except nothing is stolen. Although the police were called, the elderly gentleman would not cooperate and refused to be taken to a nearby hospital. In frustration, Commander Mallory recommends Owen McKenna to the neighbor, suggesting McKenna may be able to help her find out what really happened. If nothing was stolen, what did the attacker want from Daniel?

Before the day is over, however, the first dead body in this complex mystery appears on the beach not far from the Bijou neighborhood where Daniel Callahan lives. McKenna, a serious art aficionado, is called to the scene to possibly assist Mallory in identifying the victim’s unusually large tattoo on his back. In addition to the tattoo, the swimmer’s body is grotesquely bloated. McKenna correctly guesses the tattoo is of a German painting of a shipwreck known as “The Wreck of Hope.” Just before leaving the beach, a wallet and ID are found hidden in the victim’s swim trunks. Can his name, Colin Callahan, be a coincidence?

Tahoe Deep is packed with enough characters and clues to keep even the keenest sleuth guessing. Helping McKenna along the way is his girlfriend Street, a professional entomologist, who identifies a mite, a key to locating some of the bad guys. Spot, Owen’s faithful Harlequin dalmatian, takes a bite of the action, too. Daniel Callahan’s neighbor, librarian Mae O’Sullivan, is an amateur free diver whose skill is critical to the treasure thought to be aboard the sunken steamer. Is this a murder mystery or a treasure hunt? Is there a hidden treasure? Borg is at his best in the fight scenes, car chases, and general mayhem that occur both above ground and underwater. This time, McKenna must dive deeper than ever before to find the bad guys and to make sense of what young Daniel Callahan heard and saw on that August evening in 1940.

It took only one day to read Tahoe Deep, and when finished, I sat back and wondered what it is about reading a good mystery that gets me every time. Mysteries are not my favorite genre even if addicted to Borg’s McKenna series. So why, the minute I got my copy, did I drop everything to sit down and read it? The public has read mysteries for more than a hundred years, and the genre isn’t likely to shrink any time soon. Their popularity must be more than entertainment. Then it hit me: it’s the relief of arriving at a resolution! How many things in our lives seem to be beyond resolution? Money? Family? World unrest? Climate? Enough! Let me read something that comes to a resolution!

I shared my thoughts with Borg, and he agreed I was probably on the right track. It’s true, yes, McKenna solves a murder or two in each story, but even more than that, the characters McKenna helps are almost always returned to a state of wholeness by the resolution.

There is a difference between solving a crime and reaching a state of resolution. Borg’s Owen McKenna Mystery Thrillers delivers on both counts. – Sunny Solomon 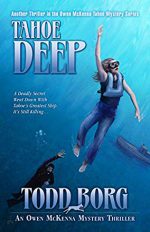 Sunny Solomon holds an MA in English/Creative Writing, San Francisco State University. She is a book reviewer for “The Clayton Pioneer” and her poetry and other writing has been published in literary journals, one chapbook, In the Company of Hope and the collection, Six Poets Sixty-six Poems. She was the happy manager of Bonanza Books, Clayton, CA and Clayton Books, Clayton, CA. She continues to moderate a thriving book club that survived the closure of the store from which it began. Sunny currently lives next to the Truckee in Reno, NV.
More from this reviewer
PrevWhat You Have Heard is True
Caleb’s Crossing — Unknown historyNext