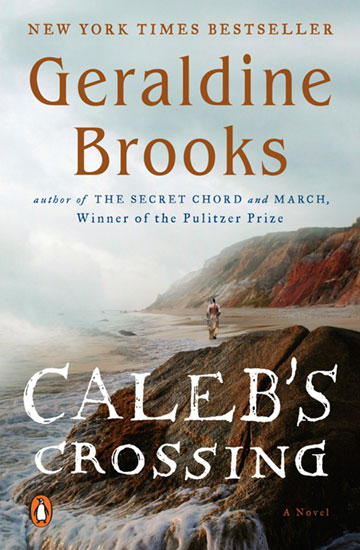 Caleb’s Crossing illustrates Geraldine Brooks’ affinity for little-known historical characters whose nearly-anonymous lives can be enhanced by her fictional imagination.

Caleb Cheeshahteaumauk, the subject of her novel Caleb’s Crossing, is especially unique. He was the first native American to graduate from Harvard, one of only 465 such elite graduates in the seventeenth century. A member of the Wopanaak tribe on Martha’s Vineyard, Caleb apparently learned English at a local day school, then attended a prep school on the mainland where he was educated in Greek, Latin, and Hebrew. Only one page of his writing exists today, so Geraldine Brooks was free to reconstruct his exceptional story almost from scratch.

She chooses to tell that tale through the voice of a precocious Puritan teenage girl. Bethia Mayfield springs wholly from Brooks’ imagination, although the Mayfield family is loosely based on the Mayhews, a missionary family who settled on Martha’s Vineyard and worked with the Indians—the “salvages”—there. Bethia first meets Caleb on the beach, where he schools her about the native plants while she teaches him English. Later, her family life disrupted, she finds herself in Cambridge. There, she can watch Caleb settle into his life of abstract learning and grow further from his Wopanaak roots. Their friendship lasts throughout Brooks’ novel, and Brooks handles that fictional rapport in surprisingly realistic ways.

Several thematic emphases are worth noting in Caleb’s Crossing. The first considers Caleb’s position between two worlds. When the novel begins, he truly is a child of the land. By the end, he is a man of his books, his rhetoric, and his liberal arts sophistry. Joining him in that intellectual journey is another “salvage,” (the Puritan spelling, and thus Bethia’s, not mine) Joel Iocoomis, who actually studied at Harvard, too. Brooks effectively portrays the ways these two young men supported each other while enduring what were often racist situations. Their fellow scholars, sons of Boston ministers, politicians, and entrepreneurs unimpressed by the English-based benefactors who wanted education for the “salvages,” alternately treated Caleb and Joel with cruelty and indifference. Even though Brooks could find little first-hand information about Caleb’s schooling, she carefully researched the early Harvard years and effectively presents the difficulties Caleb and Joel must have encountered there.

Likewise, she examined as much documentation as she could find about the lives of young women in Puritan New England. Thematically, Brooks delves into the inadequacies of their education, their culinary servitude, and their ingratiating subservience to men. Bethia, a free spirit, is expected to conform. Her countless rebellions, small and large, add another dimension to Brooks’ thematic examination of how fore-ordained white male domination dictated the early settlers’ very existences. Because Brooks does a good job of featuring sympathetic male role models as well, the result is a balanced account, not a sexist one.

Reading Caleb’s Crossing in thematic terms is especially gratifying. The novel is written in imitation seventeenth-century prose, which adds realism to the story but sometimes holds the reader at arm’s length. Even so, once I was familiar with Bethia’s locutions, I was wholly engrossed in the narrative of her life, and of Caleb’s. And I was particularly struck by the gendered and racial threads profoundly and provocatively embroidered throughout their stories. Geraldine Brooks has written an in-depth narrative that is a model for the historical novel genre.  —  Ann Ronald 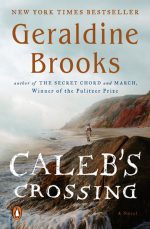 Ann Ronald is a retired English professor from the University of Nevada, Reno. Author of dozens of reviews, she’s also written a number of books about the American West. They include literary studies such as The New West of Edward Abby and Reader of the Purple Sage, cultural studies such as GhostWest and Oh, Give Me a Home, and nature writing such as Earthtones: A Nevada Album. Her latest is a work of fiction, Friendly Fallout 1953. Since retiring, she’s been reading vociferously, so “Bookin’ With Sunny” is giving her a wonderful opportunity to share thoughts about her favorite new discoveries.
More from this reviewer
PrevTahoe Deep – Diving for treasure
Man with a Seagull on His HeadNext