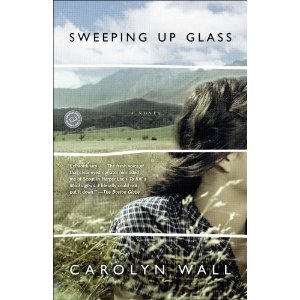 Hang on folks, here comes the best read I’ve had this year. Carolyn Wall, an Oklahoma resident who has taught creative writing to children and run a national writing program for prisons, has now published her first novel. And if her second novel, already in the works, is anywhere near as good as Sweeping Up Glass, it should also be a “must read.”

Sweeping Up Glass at first appears to be a story narrowly confined to the life of Olivia Harker of Aurora, Kentucky, a small mountain town in depression-ravaged, Pope County. But the captured reader soon realizes that Olivia’s story is hauntingly wide in scope. What a pleasure to recommend a novel that excels in character development, setting and plot. I’ve never been to Kentucky, but when Olivia speaks on page one, I’m in, hook line and sinker: “There’s nobody on this strip of mountain now but me and Ida, and my grandson, Will’m. While I love the boy more than life, Ida’s a hole in another sock.” Wall doesn’t waste a word. By those two sentences, the reader knows that location is important, Will’m is beloved, and Ida probably represents a bottomless pit of misery.

This novel has been compared to Harper Lee’s To Kill a Mockingbird. The comparison is not entirely off, but Wall’s story of Olivia’s family, from Ida, her dangerously neurotic mother, to Tate Harker, her decent, hard working father, can stand on its own. How do we love those who are truly unlovable and find the honesty and courage to love and care for those who are just beyond our reach? Olivia’s life is an attempt to come to terms with a reality that seems determined to beat her down.

In addition to Olivia’s story, Wall has created Aurora, a black and a white town, with its own murderous history, a history in which Olivia finds her family more deeply and dangerously entwined than she could have imagined. Tate Harker, for all his decency, has his own secrets. These secrets create enemies. Both secrets and enemies not only outlive Olivia’s father, but also remain unknown to Olivia until the silver-faced wolves (brought to Big Foley Mountain by her grandfather sixty-five years before) are mysteriously and methodically hunted down and killed. The wolf killers are also hunters of another type; a special group of men who meet behind locked barn doors and have enough rifles and rope to match their hate. Olivia and her grandson Will’m are not their only prey. The dark part of Aurora has silently suffered and as close as Olivia has become with some of the black families, they have kept their worst stories to themselves.

Olivia’s threats come from within her family, as well. At eleven years old, Will’m’s mother who abandoned him when he was still a baby, returns to Olivia, announcing it is time for Will’m to come to California and live with her. It is a dreadful standoff. Olivia thinks of Solomon splitting the baby and the mother who loves the child enough to let go. She responds to that thought: “Only I can’t let go, and that makes me the wicked one.” She continues, “If I shout he can’t go, that he’s mine because I’ve raised him – he’ll be like a piece of old cloth we’re ripping in half.”

Olivia, her family and fellow inhabitants of Aurora are characters whose originality and depth will stay with the reader long after their secrets are unearthed and their lives changed forever. Wall has written a fine first novel and it should endure within the body of American literature.

Sunny Solomon holds an MA in English/Creative Writing, San Francisco State University. She is a book reviewer for “The Clayton Pioneer” and her poetry and other writing has been published in literary journals, one chapbook, In the Company of Hope and the collection, Six Poets Sixty-six Poems. She was the happy manager of Bonanza Books, Clayton, CA and Clayton Books, Clayton, CA. She continues to moderate a thriving book club that survived the closure of the store from which it began. Sunny currently lives next to the Truckee in Reno, NV.
More from this reviewer
Prevlet’s take the long way home
London Calling, Book 3 of the JP Kinkaid ChroniclesNext