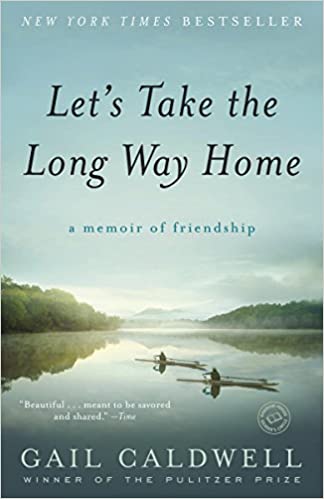 Let’s take the long way home is Gail Caldwell’s memoir of friendship and the love that can endure past death.

As a book reviewer whose least favorite genre is memoir, I raise my book-holding hands in surrender to Gail Caldwell’s let’s take the long way home. If you’re a reader who has a favorite friend, or has taken one drink too many (or knows someone who has/does) or loves dogs, long walks, or values your solitude, or is in any way human, you should read this book.

How important can a friendship be? For Gail Caldwell, a book reviewer and editor, and Caroline Knapp, the author of Drinking, a Love Story, it is a pivotal chapter without which their life stories would not have been complete. Simply put, friendships can be everything. They teach us about ourselves with patience, understanding, acceptance, laughter, respect, and love.

Caldwell’s life as a writer is a solitary one. She, like Knapp, has overcome alcoholism, but that is not their greatest bond. The sticking stuff of their relationship is their acceptance of each other, flaws and all. Caldwell’s writing is honest and moving, without sentimentality. Her insights into the writing life deftly prove this point: “If writers possess a common temperament, it’s that they tend to be shy egomaniacs; publicity is the spotlight they suffer for the recognition they crave.”

We follow Caldwell from her southern roots, “I had grown up staring at the vast, imprisoning horizon of the Texas Panhandle . . .” to the northeast, as she takes us to the forests and fields where she and Knapp hike with their beloved dogs every season of the year: “All of it offered a palette in time and space where beauty was anchored to change.”

Change is a word to remember well. Everything changes when Knapp is diagnosed with lung cancer and dies a short time later. Caldwell’s book proffers the idea that death can have a life of its own. As Caldwell looks back on the days and hours before her friend’s death, she concludes that such suffering “. . .is a badly lit corridor outside of time, a place of crushing weariness, the only thing large enough to bully you into holding the door for death.” The handling of her grief and the gradual understanding of its accompanying solitude is what makes this book stand out.

Their friendship included rowing on the Charles River, swimming laps, rigorous and sometimes hilarious dog training, evenings spent in their own company or in the company of friends and colleagues, and hours alone, knowing their friendship was only a phone call away. “We lived here for each other, and for everyone else we loved within twenty miles and for all the good reasons people live where they live.”

Caldwell poignantly describes the loss of the meetings, the conversations so expected, so theirs: “Now we couldn’t talk anymore and so I didn’t either, our narrative became a choreography of silence.” And if their narrative changed, as this book suggests, Caldwell claims “Life, not death, has intervened.”

An earlier observation that the author makes about where we live, becomes almost prophetic at the end of that reflection: “Or they need to leave, so that they can invent what they need someplace else.” The need for tangible memories, a sweater, a photograph, a dog’s collar, or in Caldwell’s case, a favorite scull, is what we humans seek as compensation for loss. Caldwell gives the reader a statement of near faith, a statement that all of us who have ever lost a beloved can grasp with utter clarity, when we read, “Her death is what I had now instead of her.”  –  Sunny Solomon 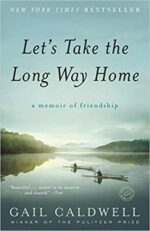 So Brave, Young and Handsome

The Vagrants is Yiyun Li’s first novel. Her earlier book, A Thousand Years of Good Prayers, is a collection of short stories. The praise and 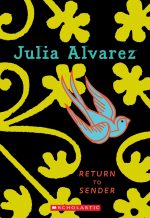 RETURN TO SENDER In Return to Sender, Julia Alvarez, popular American novelist whose cultural roots are in the Dominican Republic, has once again turned her depth of

Sunny Solomon holds an MA in English/Creative Writing, San Francisco State University. She is a book reviewer for “The Clayton Pioneer” and her poetry and other writing has been published in literary journals, one chapbook, In the Company of Hope and the collection, Six Poets Sixty-six Poems. She was the happy manager of Bonanza Books, Clayton, CA and Clayton Books, Clayton, CA. She continues to moderate a thriving book club that survived the closure of the store from which it began. Sunny currently lives next to the Truckee in Reno, NV.
More from this reviewer
PrevThe Possessed, Adventures With Russian Books and the People Who Read Them
Sweeping Up GlassNext