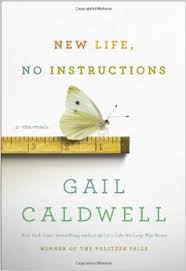 One of the great pleasures of reading is to discover an author who knocks your socks off, not just with the first book read, but with every title after the first. Such is the case for me with Gail Caldwell. I started with Let’s Take the Long Way Home (2011), a singularly moving memoir of the friendship between two women and the effect of the sudden death (from cancer) of one on the other. The next read was an earlier title, A Strong West Wind (2007), Caldwell’s memoir from her youth in the Texas Panhandle to her eventual migration to Cambridge, Massachusetts.

As a staff writer at the Boston Globe for more than twenty years (chief book critic), Caldwell was awarded the Pulitzer Prize for Criticism in 2001. When I read that she had a new book coming out, New Life, No Instructions, I begged my favorite Random House rep for a review copy with a very atypical promise that the book would definitely be reviewed. I’m convinced her next award should be in the field of philosophy. I was not at all surprised, midway through the book, at how quickly the socks came off again.

For those readers not familiar with Caldwell, a few facts can be revealed without spoiling the content of New Life, No Instructions. The author contracted polio as a child, is a recovering alcoholic, has strong survival skills, and has had a long time love affair with dogs. Another important factor is her relationship with both her mother and father. Until their deaths, it was always a work in progress, and that progression was filled with hard-won understanding and gratitude. Her mother, in a phone call, tells her not to take that next drink. Caldwell writes: “I didn’t know I was close to a drink, but she did, and she knew it would be the worst thing and that she might be able to stop it. And she did—she stopped my free fall. The ledge of my mother, as I dropped through space.” Who else but Caldwell would write “the ledge of my mother?”

Many people will read this book as a story of loss, not only a reminder of the loss of her dearest friend, Caroline Knapp (Drink: A Love Story) in 2002, but the loss of her father a year later (. . “the great oak tree fallen on the landscape”), then her mother, “a force field of wit and strength” in 2006, then two years later, her beloved Samoyed, Clementine, her constant companion of thirteen years.

New Life, No Instructions is exactly what the title suggests, new life. This “new life” begins with a new Samoyed, bought from a breeder not long after Clementine’s passing, a puppy she calls Tula. The “no instructions” part of the title is revealed when her middle-aged body begins to show extreme wear and tear as it attempts to keep up with the energetic Tula. Caldwell sought medical attention for her decline and after X-rays were taken, she was told  “the scaffolding of my hip was a junkyard of bone.” The doctors were astounded that she had managed as long as she had considering that her polio-damaged leg muscles had not structure to support them.

Caldwell’s “new life” now included not only hip replacement, but a nearly two-inch lengthening of her polio-damagd leg. “What do you do when the story changes in midlife? “It’s like leaving the train at the wrong stop. You are still you, but in a new place, there by accident or grace, and you will need your wits about you to proceed.” Wit is something Caldwell is not short on.

Her new life existed inside her recovery from the surgery to replace her hip and lengthen her leg. As a single woman, ‘“she’s solo”’ her friends said, ‘“she needs a hand.”” And that was true. “It’s because solitude itself makes you stretch your heart—the usual buffers of spouse and children are missing, so you reach toward the next circle of intimacy.” Caldwell was at the receiving end of food, house cleaning and dog care. “People moved through my house and state of mind, a choreography of comfort.” Tula (the new dog) also played a major role in her recovery, a recovery that included pain, humility, frustration and fatigue.

Caldwell is pragmatically consistent in her ability to deal with adversity. She doesn’t blink when accurately describing exactly what the surgery and her recovery would entail. The story is not Pollyanna-ish. Caldwell’s honesty is at the core of her in-depth telling of this most difficult time in her life, honesty and a heart almost always ready for whatever station her train stops at.      -Sunny Solomon 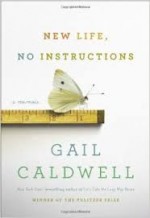 Sunny Solomon holds an MA in English/Creative Writing, San Francisco State University. She is a book reviewer for “The Clayton Pioneer” and her poetry and other writing has been published in literary journals, one chapbook, In the Company of Hope and the collection, Six Poets Sixty-six Poems. She was the happy manager of Bonanza Books, Clayton, CA and Clayton Books, Clayton, CA. She continues to moderate a thriving book club that survived the closure of the store from which it began. Sunny currently lives next to the Truckee in Reno, NV.
More from this reviewer
PrevOut Stealing Horses
The FarmNext