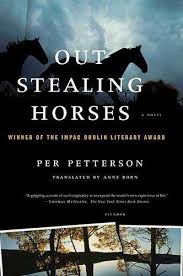 Out Stealing Horses, by Per Petterson, is what I might describe as a double-layered coming-of-age novel. A sixty-seven-year-old man contemplates the events of his fifteen-year-old self’s most significant young summer. In so doing, he comes to understand not only what he then learned about growing up but also what now dictates his aging actions. He has sold his business and taken refuge in a distant corner of Norway, far from city life and other people. He hasn’t even told his daughters how they might reach him. Why? The answer remains one of many mysterious undercurrents bubbling beneath the surface of Out Stealing Horses.

The events in the past recur in Trond Sander’s imagination. He reconstructs what happened in another rural Norwegian setting, where he and his father lived in another isolated cabin. Trond’s mother and sister stayed behind in Oslo, while the two males enjoyed fishing, logging, and camping out. Those historic interactions form the heart of the novel. Events in the present are filtered through Trond’s eyes, too. So the reader has no other perspective whatsoever.

This leaves a lot to the reader’s imagination, for Trond is neither forthcoming about details nor precise about relationships and interconnections. Out Stealing Horses is a particularly nuanced novel, so a reader who wants everything tied neatly together at the end will be sorely disappointed. In fact, this novel’s final section moves suddenly away from rural Norway and takes Trond back into Oslo and then into Sweden. Now he is with his mother, for the first time in the book, and their actions together appear totally removed from the rest of the story. And yet, they subtly underscore the first two sections, and add an exclamation point. When I finished Out Stealing Horses, I shook my head. What? The more I think about that ending, however, the more I see what Petterson intended. And the more I understand about Trond Sander and his concurrent coming-of-ages.

A question that always occurs to me when reading a book in translation is if the dialogue and description is true to the language of the original. Anne Born’s depiction of Per Petterson’s prose is stark, spare, and utterly lyrical. No words are wasted, ever. Sometimes, in the grip of intense action, a sentence will run on for half a page, but never does that sentence contain anything extraneous. Rather, it’s as if the action were spilling out in real time, and as if Trond can’t take a single second to elaborate. Sometimes, too, a description will be elongated, until the Norwegian forest takes on its own intense characterization. Most of the time, however, the prose is terse, the words carefully chosen. Does it directly replicate the Norwegian original? I like to think so, but I can’t be sure.

Quite possibly Out Stealing Horses is a novel to be read more than once. Perhaps Petterson and Trond gave me more information than I realized? I still have many questions about what exactly happened? At the end of that fifteen-year-old’s summer? And three years ago in Trond Sander’s life? A mark of Petterson’s talent is that he makes me wonder. And wonder. And wonder.    – Ann Ronald

Also available by Per Petterson: Ashes in My Mouth, Sand in My Shoes; It’s Fine by Me; I Curse the River of Time; To Siberia; In the Wake. 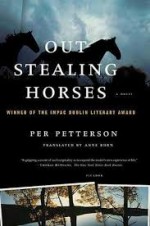 Ann Ronald is a retired English professor from the University of Nevada, Reno. Author of dozens of reviews, she’s also written a number of books about the American West. They include literary studies such as The New West of Edward Abby and Reader of the Purple Sage, cultural studies such as GhostWest and Oh, Give Me a Home, and nature writing such as Earthtones: A Nevada Album. Her latest is a work of fiction, Friendly Fallout 1953. Since retiring, she’s been reading vociferously, so “Bookin’ With Sunny” is giving her a wonderful opportunity to share thoughts about her favorite new discoveries.
More from this reviewer
PrevThe Other Wes Moore
New Life, No InstructionsNext