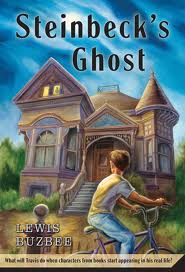 If ever there was a family read, Steinbeck’s Ghost is it, a reminder to parents that a great number of books marketed to young readers (middle readers and up), are just as satisfying to adults. Lewis Buzbee, a Steinbeck devotee, has written such a book.

The story is straightforward, and in the beginning, deceptively uncomplicated. Thirteen-year old Travis Williams, recently moved to a brand-new Salinas subdivision, faces more than a change of location. All summer, Travis is troubled by the sense something is not right. Finally the identical layout of identical houses with identical landscapes comes together in the name Camazotz, the dangerously perfect planet of A Wrinkle in Time. Even his new best friend, Hilario agrees, but Hil escapes into computer games, leaving Travis wishing things had never changed.Travis’ parents, with new jobs, work harder than ever, often leaving him to fend for himself until seven or eight at night. Travis misses everything about his old life, but most of all he misses his family’s weekly outings to the John Steinbeck Library, minutes away from their home in old Salinas. Being forbidden to ride his bike past the development gates is more than Travis can bear, and one afternoon, when he knows his parents will not be home until eight, he takes off after school on his bike for the four mile trek back to Salinas proper.

Who can resist the homesick yearnings of a good kid who wants to go a library? Just before entering the library his attention is caught by an old man calling out, “I am Gitano and I have come back.” Travis takes note that the man is dressed in clothing that is old, not old as in ratty, but old as if from another time. The old man recedes from his attention as he enters the library. His favorite librarian welcomes Travis back, rekindling his love of reading. But strange things are afoot. Travis leaves the library with a copy of A Wrinkle in Time, as well as a copy of Steinbeck’s The Long Valley, a book the librarian believes he is now old enough to read. On his way home, Travis bikes by his old house, then detours past Steinbeck’s childhood home, now open to public tours. It is late. The house is dark except for a light in young Steinbeck’s bedroom window. Travis stares in disbelief; a young person is bent over, writing at a desk.

Thus begins a journey back into Steinbeck’s stories and at the same time forward to Travis’ first steps into maturity. Gitano, a character from The Red Pony, is the first of many Steinbeck characters who appear to Travis as if they have just stepped out from the pages of The Long Valley. Not as ghosts that go bump in the night, but as mindful guides to the powerful words that gave them birth. Steinbeck’s Ghost tells us of the importance of a library that houses these stories, a community challenged to preserve the library, and a boy beginning to understand the directive influence of what he reads in the landscape of a master storyteller.

Summer is around the corner. Make this a family read. Then Mapquest the route to Salinas, to the Santa Lucia Mountains, Cannery Row, and the Steinbeck Museum. Yes, yes, the Monterey Bay Aquarium is also nearby, but whether you live in the Bay Area or up here in Northern Nevada (or anywhere else for that matter), all things Steinbeck are practically in your backyard. Steinbeck’s Ghost can be the first stop on a wonderful journey.      – Sunny Solomon

Also available by Buzbee: The Yellow Lighted Bookshop, Memoir, a History; Blackboard, a Personal History of the Classroom; The Haunting of Charles Dickens; The Bridge of Time; First to Leave Before the Sun (with Dave Tilton); Fliegelman’s Desire. 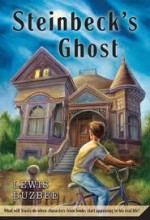 Sunny Solomon holds an MA in English/Creative Writing, San Francisco State University. She is a book reviewer for “The Clayton Pioneer” and her poetry and other writing has been published in literary journals, one chapbook, In the Company of Hope and the collection, Six Poets Sixty-six Poems. She was the happy manager of Bonanza Books, Clayton, CA and Clayton Books, Clayton, CA. She continues to moderate a thriving book club that survived the closure of the store from which it began. Sunny currently lives next to the Truckee in Reno, NV.
More from this reviewer
PrevFierce Patriot
The Other Wes MooreNext