The American Civil War lives on in our imaginations. A few of the war’s events can still elicit searing emotional responses. One such is General Sherman’s march from Atlanta to Savannah. For some it remains an unimaginable atrocity by a savage army led by a ruthless Yankee general. For others, including the author, it is neither unimaginable nor an atrocity. It stands, in comparison to similar events in other times and wars, as a comparatively mild campaign. There was destruction but no murder or rapine. And still for others, Sherman applied just enough force, but no more, to give the Rebels a clear message that war is hell and that the Union would be preserved. The core of Sherman’s patriotism was his steely resolve to preserve the Union.

But Robert O’Connell in Fierce Patriot does not focus more than necessary on Sherman’s march to the sea. For this historian, Sherman was too complex and too fascinating to be reduced to an item on the tired agenda of “the Lost Cause.” Nor is this a conventional biography. In some ways it isn’t a biography at all, but due to O’Connell’s sense of organization, writing clarity, and humor, Fierce Patriot is both compelling as a reading experience and satisfying as an intellectual one

O’Connell organizes his book around three chronological themes, each illuminating an important facet of Sherman’s busy life. As might be expected the first and most detailed facet begins with his entrance into West Point at aged 16 and ends with his retirement as General of the Army in 1883, forty-seven years later. The Civil War made him famous, set him up financially and established his celebrity status for the remainder of his life. Without his luminous personality, his “volcano of verbosity” oratorical skills, and his personal embodiment of Manifest Destiny, however, Sherman might well have spent his retirement years in a rocking chair rather than as the equivalent of a 19th century rock-star.

Sherman, despite his growing fame, knew both what he wanted and didn’t want. He adhered to his self-defined boundaries. He wanted to be known as Uncle Billy by the troops he led during the Civil War and the veterans he loved till the end of his life. He relished their attention and spoke at hundreds of their reunions. Throughout his life, during and the after the war, he mixed with the men, shared their grousing and their humor, and honored their missing comrades. At the same time, he never wanted Grant’s jobs, either of them. He was content to ride and command in Grant’s shadow during the war, even as he was given independent commands. Later, and more particularly, he did not want Grant’s job as President. He was the natural heir-apparent to Grant, but Sherman couldn’t breathe in Washington. As commanding General of the Army, his official home was Washington, but he preferred to command the army from St. Louis or from the saddle in Texas or Wyoming or the Dakotas. When pressed to run for President, he uttered one of the pithiest negations in American history: “If nominated, I will not run. If elected, I will not serve.” In public, he just wanted to be Uncle Billy, and so he was.

O’Connell takes pains to present Sherman with warts exposed. His attitudes towards Negroes, free or slave, were of his time. He may have been even more determined to tame or kill Indians than most of his fellow Americans. His words, attitudes, and actions may make us wince today, but he was no visionary in these matters. Neither was he a conventional family man. Married to a woman whom he had known since childhood, he found, as did she, that her Catholicism and his irreligion slowly drove them apart even as they expressed their love, had seven children, and he had lovers and mistresses. O’Connell unravels Sherman’s tangled lives, and in doing so, allows us to better understand this vital, complicated, important man.    – Neal Ferguson

Also available by O’Connell: The Ghosts of Cannae: Hannibal and the Darkest Hour of the Roman Republic; Of Arms and Men; Sacred Vessels; Ride of the Second Horsemen, the Birth and Death of War; Fast Eddie, a Novel in Many Voices; Soul of the Sword; 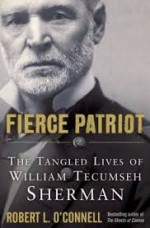 Neal Ferguson is a self described Anglo-phile. After studying for a PhD in British history and doing research for a year in various British archives, he came to the University of Nevada in 1970 to teach. Soon he found himself in administration where he remained until 2003. After returning to full-time teaching a decade ago, he decided to concentrate his teaching energies on Medieval British history and various global aspects of World War II. Dedicated to Ambrose Bierce’s proclamation that the purpose of war is to teach Americans geography, Neal insists that his students accompany him (in class) to sundry east European rivers and steppes, African deserts and jungles, south-east Asian mountain ranges and peninsulas, and small islands and coral reefs in the Pacific. Currently he is writing a book about the ups and downs of General Douglas MacArthur’s military reputation.
More from this reviewer
PrevThe Expats
Steinbeck’s GhostNext