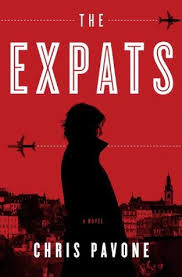 Not long ago I enthusiastically reviewed Chris Pavone’s new novel, The Accident, for “Bookin’ with Sunny.” Because I liked The Accident so much, I immediately looked for Pavone’s first work of fiction. The Expats did not disappoint me! Like its predecessor, this high-powered thriller is multi-layered, full of secrets and subterfuges and submerged stories. Also like its predecessor, I found that figuring out who is telling the truth is absolutely crucial and not obvious at all.

The reader accesses the action of The Expats through the consciousness of Kate Moore. Married to a computer expert, she finds herself living in Luxembourg, where her husband has taken a new job solving security issues for an international bank. The Moores and their two children are expats, as are most of the people they meet. They belong neither to Luxembourg nor to whatever homeland they left behind. Most of the men have mysterious jobs, and few of them are exactly who they seem to be. Nor are their wives simply helpmates and mothers. Just as important as finding out who is telling the truth is finding out who actually does what, and why.

Like so many complicated mysteries, The Expats is hard to write about because I don’t want to give away a single secret. I can’t even tell you more about Kate, because unearthing her past is critical in understanding how she perceives the present. Likewise, I can’t reveal anything about Dexter, her husband, for his career is part of the puzzle, too. What, exactly, does he do for a living? And who, exactly, is his employer?

Shortly after they arrive in Luxembourg, the Moores are befriended by another American couple, Julia and Bill. Who are Julia and Bill? Answering that question is another mystery that must be solved. Or perhaps that word should be plural—mysteries, for their exact roles are obfuscated until the final pages of the book.

The Expats isn’t just a straightforward thriller, however. It is also a riff on marriage and the secrets one keeps from one’s spouse. Although Kate and Dexter assume they know each other very well, there are dark places neither has pursued. The same is true of Julia and Bill. And all those dark places shadow the more grandiose international blackness that encompasses this novel. In other words, the marital themes echo and underscore the international themes of high finance, computer trickery, and national intrigue.

I highly recommend The Expats. Not only is the plot full of unusual and unexpected twists and turns, but the characters are fully-fleshed and subtly appealing. This is one of those novels a reader can’t put down. The final hundred pages are especially gripping. The answers and the solutions to the various dilemmas are satisfying, too. The Expats is more complex than a genre thriller, more intricate than the average novel. Like Chris Pavone’s The Accident, it’s not a book you want to miss.   – Ann Ronald

Also available by Pavone: The Wine Log, A Journal and Companion; The Accident. 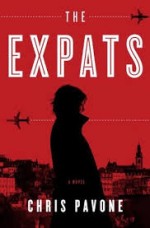 Ann Ronald is a retired English professor from the University of Nevada, Reno. Author of dozens of reviews, she’s also written a number of books about the American West. They include literary studies such as The New West of Edward Abby and Reader of the Purple Sage, cultural studies such as GhostWest and Oh, Give Me a Home, and nature writing such as Earthtones: A Nevada Album. Her latest is a work of fiction, Friendly Fallout 1953. Since retiring, she’s been reading vociferously, so “Bookin’ With Sunny” is giving her a wonderful opportunity to share thoughts about her favorite new discoveries.
More from this reviewer
PrevCare of Wooden Floors
Fierce PatriotNext