Wiles’ debut novel, Care of Wooden Floors, is laugh-out-loud, tear-making, hysterically funny. It is also mortifyingly funny as it is easy to identify with some of the situations in which the main character finds himself. The story does involve wooden floors, very expensive French Oak floors.

Oskar, a musician and composer renowned for his composition, Variations on Tram Timetables, must travel to Los Angeles to divorce his wife. Oskar arranges for a friend (the narrator) who lives in London to come to his apartment in an unnamed Eastern European city to house-sit and care for his two cats, Shossy and Stravvy, (named after Russian composers). Early in the story his friend darkly reacts to first seeing the cats, “There is something primal in the sound of claws against the ground moving towards you, and an animal jumping. It fires something back in the lizard root of the brain, springs the safety catch off, triggering a reaction designed for survival and still operational despite being largely unneeded; a working Betamix video recorder in the animal mind. Still it wired out its useless message like an aggressive lout shouting a drinks order at a defenseless gland – A pint of adrenalin and make it snappy, bitch.. I tensed involuntarily as two furry streaks cannoned through my legs towards the living room, two irresistible vectors of feline purpose. Ah –I thought – the cats.”

The apartment does not surprise his friend. “This was exactly how I had imagined Oskar’s apartment to be – it was the obvious habitat for the mind I knew. Multilingual Oskar. Oskar who appreciated design and modernity and expensive, extravagant simplicity. The apartment’s spaces were measured in air miles. It’s air had arrived in the bubbles in a thousand crates of San Pellegrino.” More darkly humorous observations continue: “The beautiful wooden floor didn’t have nails, it had a manicure.”

Oskar leaves “a careful list of instructions on the dining table. Oskar did not do chaos. He did not do disorganization. He did not do disorder.” It is the first of many lists/notes Oskar writes in order that his perfect home be maintained as such, with much emphasis on the wooden floors. Notes and instructions show up throughout the apartment, including places that, in the beginning, surprise, and later anger the protagonist. His friend thought he knew Oskar well, but he questions that as more notes appear,  instructing him how to feed and care for the cats, where he cannot sit, not to play the piano, even what events to attend, and of course notes about the wooden floors. Through the discovery of the notes, Wiles incorporates memories and stories to flesh out the main character, a little about the soon-to-be divorced wife Laura, and much about Oskar.

Careless inattention to a wine glass left resting on the floor begins a series of mishaps and tragedies that damage the wooden floors, may ruin the friendship, and even result in death. The dark humor is maintained through the worst of the catastrophes and is even funnier for it seeming to be at times inappropriate. The unexpected twist at the end of the story reveals much more about the friendship, while continuing the humor.

Care of Wooden Floors is a cleverly written story that is convincing and all the more funny for some of the disasters being just a little over the top. The author, an architecture and design journalist, lives in London and is at work on his second novel. – Vivienne French 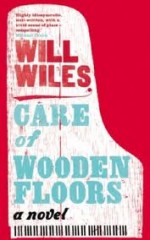 Vivienne French was born in New Zealand and grew up a voracious reader, much to the thanks of her “Mum” and fourth grade teacher, Mr. Sanders. Her short stories and articles have been published in women's magazines, specialty magazines and her hometown newspaper. She has been a resident of Reno, Nevada for twenty-nine years and has worked professionally for a number of nonprofit service organizations. She currently teaches grants writing at Truckee Meadows Community College and serves on the board of the Friends of Washoe County Library. She looks forward to getting back her favorite pastime, reading for the love of reading.
More from this reviewer
PrevThe Birth of Venus
The ExpatsNext