Spy of the First Person 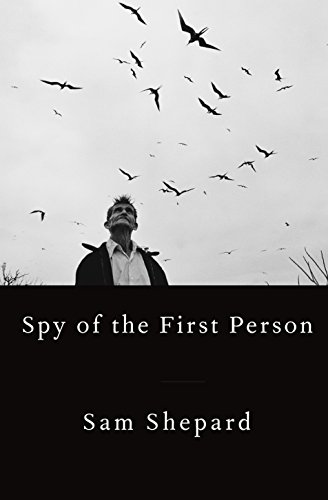 Maybe a review of Pulitzer prize-winning playwright, actor, screenwriter, and essayist Sam Shepard’s last work will seem a stretch from the books I generally review, but bear with me. At only 84 pages, Spy of the First Person could be considered a novella. Because the language is specific, evocative, and sits well on the page, I might call it a narrative prose poem. Some chapters are no more than one page. Within its title, the words . . . of the First Person should tell us the “I” of a first-person point of view could also be categorized as memoir. Spy of the First Person is Shepard’s last written work before he died of ALS just days after completing the book in 2017.

As its title suggests, Spy of the First Person is enigmatic, haunting, and not entirely accessible until you think strongly about its title and pay attention to the opening paragraph. “Seen from a distance. That is, seeing from across the road, it’s hard to tell how old he is because of the wraparound screen porch.”

Whose voice is that? And who is the speaker talking to? The reader, of course. The first two sentences tell us things critical to what lies ahead. The speaker continues to describe this person with uncertainty, “hard to tell,” “. . . as far as I can tell,” and “could be. . .” Certain words, however, suggest a degree of powerful recognition: “Purple. Lone Ranger.” “A rocking chair . . .” “The baseball cap . . .” What we do know is that the observed person is male, probably old, and his identity is hidden by a screen porch. How much more is hidden?

Neither the observer nor the observed is identified. The observer goes on to describe folks passing by, then stopping, going to the porch, sitting down, and speaking to the man who is rocking in his chair and mumbling to himself. “And they just walk up and sit down. They seem to know him somehow. At first they seem as though they don’t, but then they do.” Chapters are short, some no more than a single page, set out as photographs to be read.

The voices move between the observed and observer: “Why is he watching me?” And not long after that: “Sometimes, very often, he speaks to himself.” And then, “I see that his lips are moving, his lips are keeping him company.”

Now the man in the rocking chair speaks. He is old and ill. He matter-of-factly tells us of the myriad medical tests he’s undergone and the medical facility in the painted desert.

And stories told, barely remembered snatches of the old man’s past, his parents, or maybe his children: “The seaweed is soaking. Far in the distance two people are getting up from the beach just in bathing suits folding a huge orange towel.” The reader can almost hear the click-click of an 8mm projector running a summer reel. If the observer were closer, would these be the words coming from the observed’s lips? By this time, we, the readers, understand the stories are being told by an old man failing in health, but a man who is cared for by those (his children, others?) who bring him snacks and “sort of gently lower him back down” into the porch chair.

“The past doesn’t come as a whole. It always comes in parts.” The parts include the East Coast, California, Mexico, the mountains, the deserts. Is he speaking to a son or someone else when he tells of his grandmother, Aubra Steagle, who came to America from a foreign country?

His stories are told to his children, his caretakers, or those who stop by, those he doesn’t immediately recognize, and maybe to those who now only live in his recollections.

The observer takes note of the man’s facial movements: “They’re trying to tell him that things have changed.” The old man knows about change. “Now he must ask other people. Now he can’t do without other people.”

As we age, do we see ourselves aging? And what is it we see? Chapter 4 photographically sits on a single page. The old man senses the observer. “Someone wants to know something about me that I don’t even know myself.” And then, “I can feel him getting closer and closer.”

What is noted from where the observer is that everything, breath, coordination, mind; that “Things run down.” Is the author both the observer and the observed? “Sometimes it feels like we’re the same person. A lost twin.”  A must-read.  –  Sunny Solomon

Also available by Sam Shepard: Sam Shepard, Seven Plays; The One Inside; Motel Chronicles; Rolling Thunder Logbook, The Late Henry Moss; Cruising Paradise; Ages of the Moon; Two Prospectors; A Particle of Dread; Spencer Tracy is Not Dead; Day Out of Days; Great Dream of Heaven. 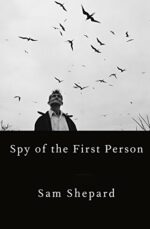 Sunny Solomon holds an MA in English/Creative Writing, San Francisco State University. She is a book reviewer for “The Clayton Pioneer” and her poetry and other writing has been published in literary journals, one chapbook, In the Company of Hope and the collection, Six Poets Sixty-six Poems. She was the happy manager of Bonanza Books, Clayton, CA and Clayton Books, Clayton, CA. She continues to moderate a thriving book club that survived the closure of the store from which it began. Sunny currently lives next to the Truckee in Reno, NV.
More from this reviewer
PrevThe Paris Architect and The Fallen Architect
Yellow BirdNext